U.S. Navy to Return to Flying the Union Jack

U.S. Navy ships and craft will return to flying the union jack rather than the first Navy jack from June 4, 2019. The move comes around 17 years after the change was made in the wake of the September 11 terrorist attacks.

On May 31, 2002, then Navy Secretary Gordon England directed all warships and auxiliaries of the U.S. Navy to fly the first Naval jack as a temporary substitution for the Jack of the United States during the Global War on Terrorism. Most vessels made the switch on September 11, 2002, the first anniversary of the terrorist attacks.

The date for reintroduction of the union jack, not to be confused with the Union Jack of Great Britain, commemorates the Battle of Midway, which began June 4, 1942.

“Make no mistake: we have entered a new era of competition. We must recommit to the core attributes that made us successful at Midway: integrity, accountability, initiative and toughness,” said Chief of Naval Operations Adm. John Richardson. “For more than 240 years, the union jack, flying proudly from jackstaffs aboard U.S. Navy warships, has symbolized these strengths.” 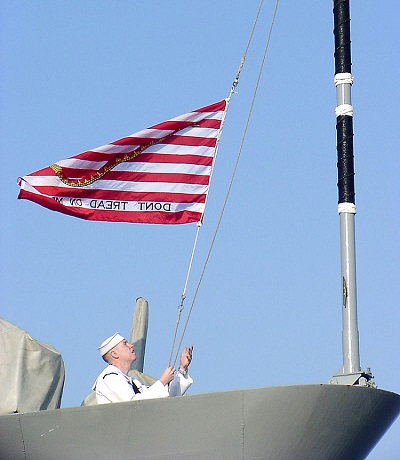 The union jack is a flag consisting of 50 white stars, representing each of the 50 states, on a blue background. A version of this jack first flew in 1777 and was updated as new states joined the union. The first Navy jack, features red and white stripes with a rattlesnake and the words "Don't Tread On Me."

“The union jack is deeply connected to our heritage and our rise as a global nation with a global Navy,” said Richardson. “The Navy is a symbol that projects American values to the world. Just as the Navy embodies the values and principles that we hold dear, our very appearance in port and at anchor communicates important messages.”