Attacks against small tankers off South East Asia’s coasts caused a rise in global ship hijackings, up to 21 in 2014 from 12 in 2013, despite piracy at sea falling to its lowest level in eight years, the International Chamber of Commerce (ICC) International Maritime Bureau (IMB) has revealed. Pirates took 442 crewmembers hostage, compared with 304 in 2013.

IMB’s annual piracy report shows 245 incidents were recorded worldwide in 2014 – a 44% drop since Somali piracy peaked in 2011. Somali pirates were responsible for 11 attacks, all of which were thwarted. However, IMB warns shipmasters to follow the industry’s Best Management Practices, as the threat of Somali piracy has not been eliminated.

Worldwide, 21 vessels were hijacked last year, 183 were boarded, and 13 fired upon. Pirates killed four crewmembers, injured 13 and kidnapped nine from their vessels. 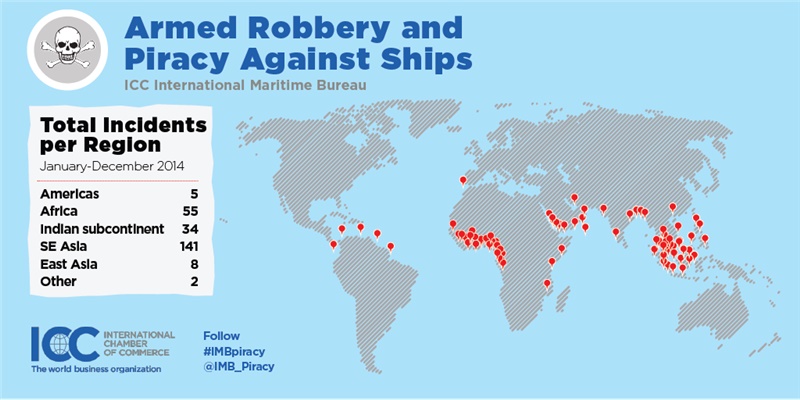 “The global increase in hijackings is due to a rise in attacks against coastal tankers in South East Asia,” said Pottengal Mukundan, Director of IMB whose Piracy Reporting Centre has monitored world piracy since 1991. “Gangs of armed thieves have attacked small tankers in the region for their cargoes, many looking specifically for marine diesel and gas oil to steal and then sell.”

Citing the death of one crewmember shot on his bitumen tanker in December, the IMB report highlights the possibility of the hijackings becoming increasingly violent. Most of the 124 attacks in the region were aimed at low-level theft from vessels using guns and long knives.

IMB commends the Indonesian Marine Police’s efforts to stem the increase in attacks in identified port hotspots. Outside port limits, pirates are particularly active in the waters around Pulau Bintan and the South China Sea, where 11 vessels were hijacked in 2014. Actions taken by the Malaysian Maritime Enforcement Agency, the Indonesian authorities and other maritime forces of regional coastal states have played a key role in responding to these attacks.

“It is important that these gangs are caught and punished under law, before the attacks become more audacious and violent,” said Mr Mukundan.

In West Africa, 41 incidents were reported, although IMB says many further attacks went unreported. Five vessels were hijacked, including three tankers, one supply and a fishing vessel. Hijackings of product tankers appeared to subside in the last quarter of 2014, with the last reported case at the end of July 2014.

Of the 18 attacks off Nigeria, 14 involved tankers and vessels associated with the oil industry. Most were product tankers, hijacked to steal and tranship their cargo into smaller tankers. Earlier in the year the waters South and West of the Brass Terminal saw a particularly concerning spate of attacks.

One Nigerian attack, among the report’s long list of piracy incidents, reads: “Two armed pirates boarded the tanker. As the crew retreated into the citadel, the onboard-armed team fired at the pirates. Most of the crew including the guards managed to retreat into the citadel. … When the guards and crew emerged from the citadel they found the C/E killed and the 3/O injured.”

In and around Ghanaian waters, in June and July three vessels were hijacked, one of which was a fishing vessel intended to be used as a platform to hijack tankers off Nigeria. Seven vessels were also boarded while anchored at Pointe-Noire, Republic of the Congo, with ship and crew properties targeted by the robbers.

Bangladesh reported 21 incidents in 2014, up from 12 in 2013. Seventeen anchored and three vessels underway were boarded and one attempted attack on a vessel. The majority of incidents were low level thefts from vessels, although in one report three crew were taken hostage and two crew injured in two separate incidents. The Bangladesh Coast Guard helped respond to many calls of assistance from ship masters.

On Friday, Israel's Ministry of Environmental Protection responded to a leak at the marine terminal of the Eilat-Ashkelon Pipeline. According to the agency, a spill of several cubic meters of light crude oil was released when an "emergency detachment accessory" of the terminal malfunctioned.  The pipeline operator's response team sealed the leak and treated the spill with dispersants. Though the site of the spill occurred about three kilometers offshore, the ministry requested a shutdown of the desalination plant in Ashkelon...

Having had a long career in this industry with many diverse challenges, I’ve come to know first-hand the importance of adaptability. In fact, being able to adapt to change has been a consistent theme in my career and I believe has been integral to my professional growth and success.  The “when you can’t change the direction of the wind, adjust your sails” philosophy is central to my leadership style and I, along with my leadership team, aim to infuse this...