The Russian icebreaking LNG carrier Christophe de Margerie completed an eastbound transit of the Northern Sea Route in May, marking the first time a large-capacity vessel has completed the transit at this time of the year. Considered to be the most difficult months for navigation along the route due to ice conditions, navigation of this portion of the route normally commences in July.

The successful 12-day trip marked another step in Russia’s efforts to develop the Northern Sea Route as a commercial shipping lane. Russian President Vladimir Putin has called for the development of the route, setting the goal for 80 million tons of cargo to pass through the Arctic by 2024. At the beginning of 2020, Russia published its master plan for the Arctic, which Putin signed in March.

The first tests of the route begin a decade ago when SCF Group working with Novatek completed several experimental transits leading to the development of the deep-water route for commercial shipping north of the New Siberian Islands archipelago. In 2019, 31.5 million tons of goods were shipped via the passage according to the Northern Sea Route Administration, with more than two-thirds of the volume comprised of natural gas from Novatek’s Yamal LNG project.

“This successful voyage across the NSR, in May, allows us to move one step closer to realizing the full transit potential of the Northern Sea Route, marking an important expansion in the shipping opportunities available to Arctic industrial projects in particular,” commented Igor Tonkovidov, president and CEO of Sovcomflot, in the press release announcing the completion of the voyage. 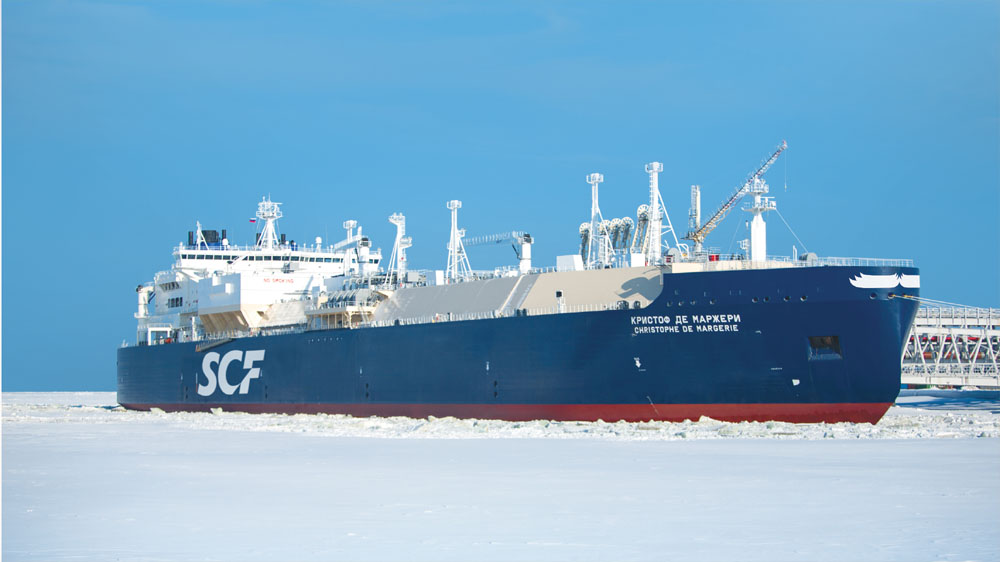 The Christophe de Margerie carrying an LNG cargo produced at Yamal left the port of Sabetta on May 18, 2020. The vessel passed the Ob Bay and a part of the Kara Sea without ice-breaker assistance before meeting with Atomflot’s nuclear icebreaker Yamal, which escorted the tanker during the ice navigation on the eastern part of the route to China. The voyage to the Bering Strait was 2,563 nautical miles and completed in 12 days.

“The ice conditions encountered during the voyage matched our forecast: on some segments, the movement was heavily obstructed, but the crew was well prepared to handle it,” said Sergey Gen, master of Christophe de Margerie. “The voyage has proven Christophe de Margerie's excellent icebreaking, maneuvering, and structural capabilities, both when following an icebreaker or sailing independently in various modes.”

The current voyage was the 45 trip for the Christophe de Margerie since the start of Yamal LNG’s operations. The first icebreaking LNG carrier, and the lead in Russia’s Arc 7 class, the vessel transported the first cargo of LNG from the Yamal LNG plant in December 2017.

The carrier, with a cargo capacity of 172,600 cbm, was designed for year-round operation in the Russian Arctic. The vessel is fitted with icebreaking and maneuvering capabilities, including a high power capacity, which allows her to operate in the extreme climatic and ice conditions of high latitudes.

The voyage provided extensive information about the ice conditions along the eastern part of the NSR, that Sovcomflot said would prove valuable information for planning transportation solutions for future industrial projects in the Arctic. They believe it could help expedite the future growth of NSR cargo traffic and in the design of future vessels to operate in the Arctic.

“We are actively working to expand the eastbound navigation season for the NSR and looking forward to further development of State support for this trade route by increasing icebreaking capabilities as well as full-scale navigation and hydrographic assistance for shipping,” said Novatek's chairman of the Management Board Leonid Mikhelson. “This support allows us to significantly contribute to the annual cargo turnover along the Northern Sea Route by implementing our large-scale LNG projects to produce up to 70 million tons by 2030.”

Russia continues to promote the Northern Sea Route as an alternative to the traditional route from Asia through the Suez Canal to Europe. They are promoting the shorter route as a means of optimizing logistics and reducing the carbon footprint of shipping, while critics emphasize the danger of accelerating global warming and climate change by opening the Arctic to development.