Imports at the U.S.’s major container ports set a new record this spring and are expected to continue at near-record levels into the summer of 2022 as retailers bring in merchandise ahead of rising costs and prepare for further supply chain challenges. The National Retail Federation reports despite the disruptions caused by the lockdowns beginning in Shanghai, the U.S. port imports hit a new monthly record in March 2022 according to its monthly Global Port Tracker report.

“Retailers are importing record amounts of merchandise to meet consumer demand, but they also have an incentive to stock up before inflation can drive costs higher,” said NRF Vice President for Supply Chain and Customs Policy Jonathan Gold. “Whether it’s freight costs or the wholesale cost of merchandise, money retailers save is money that can be used to hold down prices for their customers during a time of inflation. In addition, retailers are preparing for any potential disruptions because of the West Coast port labor negotiations, which are set to begin next week.”

U.S. ports covered by Global Port Tracker handled 2.34 million TEUs in March 2022 setting a new record in the retail trade groups tracker. March, they reported, was up 10.8 percent from February and up 3.2 percent year-over-year. It also topped the previous record of 2.33 million TEU set in May 2021 for the number of containers imported in a single month since NRF began tracking imports in 2002.

“Consumer spending is growing faster than income growth, perhaps as shoppers buy ahead of expected rising prices,” said Hackett Associates Founder Ben Hackett. “Importers are doing much the same as they continue to replenish their inventories. Doing so will protect them against potentially rising freight costs, further delays in the supply chain, and complications in upcoming labor negotiations at U.S. West Coast ports.” 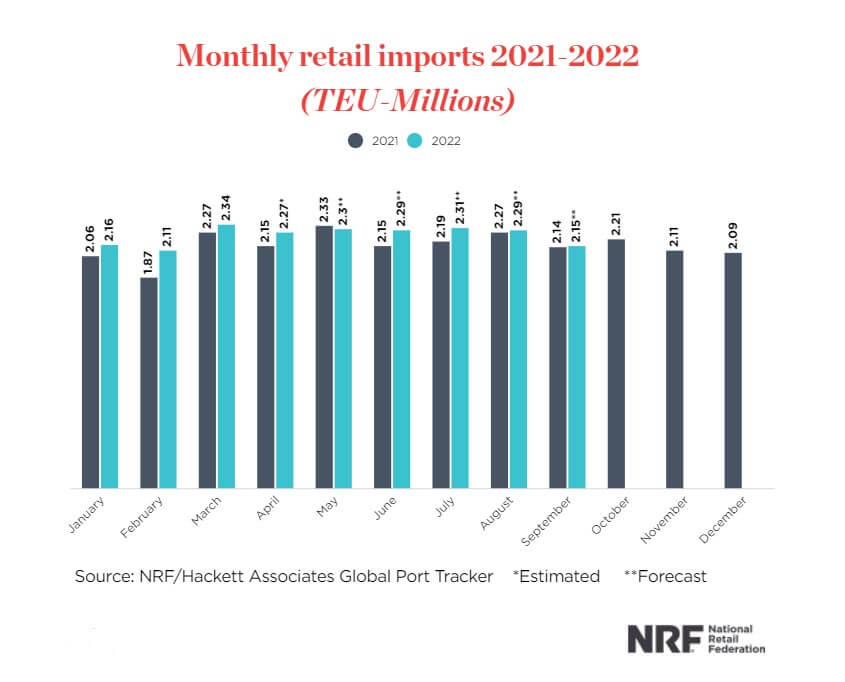 The NRF is forecasting that the first six months of 2022 will total 13.5 million TEU, up 5.1 percent year-over-year. They expect when the numbers are tallied for April it will show a 54.7 percent increase versus 2021 to 2.27 million TEU. May is forecast at 2.3 million TEU, which would be down 1.4 percent from last year but nonetheless the third-highest level on record while June is expected to rebound up 6.6 percent for 2.29 million TEU to round out the first half of the year.

July is also forecasted to show strong increases reaching 2.31 million TEU which would be up 5.3 percent versus 2021. However, the uncertainty comes from the expiration of the longshore contact for the U.S. West Coast ports on July 1 and the potential for slowdowns or disruptions. NRF has previously encouraged the parties to remain at the table and not engage in disruptions if a new contract is not reached by the time the current agreement expires.

They are, however, forecasting that August and September import levels will be up just slightly from the already high levels experienced last year. The NRF projects 2.29 million TEUs for August and 2.15 million for September.

At the end of nine months, they are forecasting that retail imports will be better than 17 percent ahead of 2021. That places the import levels at the same growth rate as 2021 when they totaled 25.8 million TEU for the year setting a new record for total imports.