A tabletop exercise focusing on a mass rescue operation in the Arctic was conducted in Anchorage, Alaska, last week.

Crystal Serenity’s 2016 Northwest Passage voyage sails on August 16 from Anchorage to New York, and the exercise provided the opportunity to test interagency cooperation in the theoretical case of a cruise ship experiencing progressive flooding in a remote Arctic region in the vicinity of the U.S./Canadian border.

Over 32 days the vessel will sail up the Bering Strait, through the Northwest Passage and along the coast of Greenland before reaching New York City in mid-September. The Crystal Serenity will follow a southern route, following the path navigated by Roald Amundsen in 1903. The vessel will stay close to the mainland, passing south of Prince of Wales Island and Victoria Island and entering the Beaufort Sea south of Banks Island.

While the Crystal Serenity will not be the first tourist vessel to transit the passage, it will be the largest with more than 1,000 passengers and 600 crew on board.

The Arctic presents the challenge of a dynamic, hostile environment and the distance, limited resources and a lack of infrastructure pose additional challenges to a response of the scope of a mass rescue operation. In 2010, the Clipper Adventurer ran aground on a shoal in the Southern Coronation Gulf, near mainland Nunavut. The crew evacuated the 128 passengers and transferred them to the Amundsen, a Canadian Coast Guard icebreaker that arrived at the scene 40 hours after the incident. 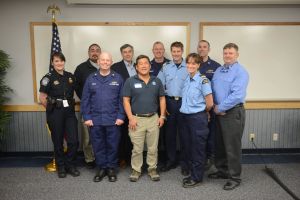 “This exercise was the culmination of a cooperative industry/agency effort that began over two years ago when we first began considering a Northwest Passage,” said Greg MacGarva, vice president of marine operations at Crystal Cruises. “Crystal Cruises is extremely grateful for the support and guidance received from everyone involved in developing our Emergency Response Plan and especially to the Coast Guard for hosting and facilitating this most valuable exercise.”

“Success in the Arctic requires a united effort between many agencies,” sat Lt. Cmdr. Jason Boyle, of the Coast Guard 17th District prevention division. “This tabletop exercise allowed an open discussion of how to cohesively respond in the event of a mass rescue operation in the Arctic.”

The scenario was designed so that the operator was forced to evacuate the ship. “That is the last thing you want to do in any emergency,” says Boyle.

“Joint exercises provide us with opportunities to test plans without risk and identify areas where improvements can be made so that all search and rescue agencies, partners and volunteers are better prepared to respond to unplanned events,” said Peter Garapick, the search and rescue superintendent for the Canadian coast guard, Central and Arctic Region. 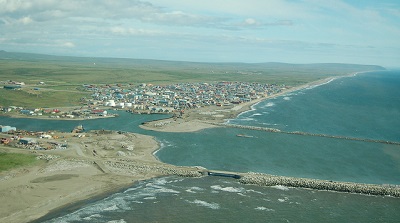 Representatives from the U.S. Coast Guard officials also visited the Alaskan city of Nome this week. Rear Admiral Dan Abel spoke to community leaders who referred to the Arctic as a “new ocean.” Nome and other towns along Alaska’s coast will see a jump in visitors and summer revenue from ships like the Crystal Serenity despite concerns about the region’s ability to deal with a potential disaster at sea.

Tom Vayden of the Local Emergency Planning Committee said: “I think it’s very important that the major players remember that Nome is here with a lot of resources and that we can be on the ground first and help.”

He urged better communication between the Coast Guard and coastal communities like Nome. The U.S. Coast Guard and the Department of Defense are scheduled to host the Arctic Chinook Drill in August a few days after the Crystal Serenity passes Nome.

Earlier this month, Crystal Cruises signed a charter party agreement with Tactical Marine Solutions of Canada and the British Antarctic Survey to have the RRS Ernest Shackleton escort Crystal Serenity on its 32-day expedition. The Ernest Shackleton is an ICE 05 classed icebreaker (exceeding the more common 1A Super class) that will provide operational support to Crystal Serenity, including ice breaking assistance should the need arise, and carry additional safety and adventure equipment. 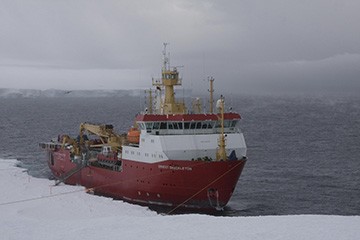 The expedition crew comprises of expert guides with many years’ experience transiting the Northwest Passage and also a diver and support team trained in the use of the emergency equipment carried on board. The Ernest Shackleton will support Crystal Serenity’s adventures ashore, carrying newly acquired zodiacs for “wet landings”, while the vessel’s crew will provide expert assistance during flightseeing adventures.

Prior to making the voyage, Crystal Serenity will be outfitted with state of the art forward looking sonar, ice detection radar, ice searchlights and thermal imaging, as well as an ice navigation system that will display near real time satellite ice imagery and ice forecasts. In addition, the master and bridge team will attend ice navigation training at a simulator in St John’s, Newfoundland, and two veteran Canadian ice pilots will be on board to assist the bridge team in managing the information provided by additional equipment which is not typically found on cruise ships. The Ernest Shackleton will also carry an experienced ice pilot.