A new record for gas exports from Norway was set in 2016, when 108.56 billion standard cubic metres (scm) (3.8 tcf) were delivered within Gassco’s operatorship to Germany, Belgium, France and the U.K.

In 2015, 108.44 billion scm of gas were exported from the Norwegian continental shelf to European buyers. 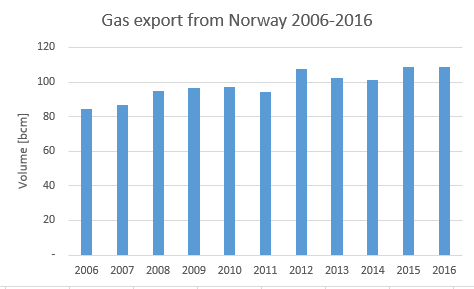 Deliveries of natural gas liquids and condensate from the Gassco-operated process plants at Kårstø and Kollsnes (via Vestprosess) in western Norway also rose in 2016, reaching 10 million tons compared to 9.6 million tons the year before.

“Deliveries show that European demand for Norwegian gas is higher than ever,” says Frode Leversund, CEO of Gassco. “It’s also gratifying that we’ve been able to set a new record in a year characterised by extensive maintenance work.”

State-owned Gassco is the operator for Norway's natural gas pipeline network, including the network of international pipelines and receiving terminals that exports Norway's natural gas to the United Kingdom and continental Europe. The pipelines are owned by Gassled, a joint venture between the Norwegian government (46 percent ownership) and Statoil (five percent ownership). The remaining 49 percent is owned by two Canadian pension funds, other institutional investors and private companies.

Norway is the largest holder of crude oil and natural gas reserves in Europe, and it provides much of the petroleum liquids and natural gas consumed on the continent. Norway was the third-largest exporter of natural gas in the world after Russia and Qatar in 2015. Natural gas production increased nearly every year since 1993, except for a small decline in year-over-year production in 2011 and 2013.

In 2015, the petroleum and natural gas sector accounted for almost 40 percent of Norway's export revenues and more than 15 percent of the country's gross domestic product.