A Belize-registered product tanker operating in the Bahamas sunk after it was “rear-ended by a 207-foot super yacht,” according to its operators Maritime Management of Miami. Details on the incident and the operation of the two vessels are scarce, but the tanker company is reporting that all seven members of the crew were rescued without injury.

The product tanker was carrying a cargo of “non-persistent materials, LPG, Marine Gas, and automotive gas,” according to Maritime Management. The vessel was approximately 15 miles northwest of New Providence when the collision occurred with the super yacht Utopia IV, an aluminum hull charter yacht operating out of the Bahamas and Florida. The yacht accommodates 12 passengers and normally has a crew of 13.

The 160-foot tanker was reportedly “traveling on its proper watch when it was rear-ended,” said Maritime Management. The collision happened just after 10:00 p.m. local time. “The catastrophic force of the collision pierced the stern of the tanker causing the tanker to sink to the ocean floor at an estimated depth of 2,000 feet.”

The Utopia IV is a high-power yacht designed and built by Italy’s Rossinavi in 2018. The Italian designers report that the vessel is fitted with four light Rolls Royce engines as well as four hydro jets, that provide it with a top speed of 33 knots and an average cruising speed of 26 knots. It is unclear what the speed of the yacht was at the time of the collision and if it was operating with passengers on a charter. The yacht is listed for sale at $51 million. It returned to the dock after the accident with visible damage on its bow. 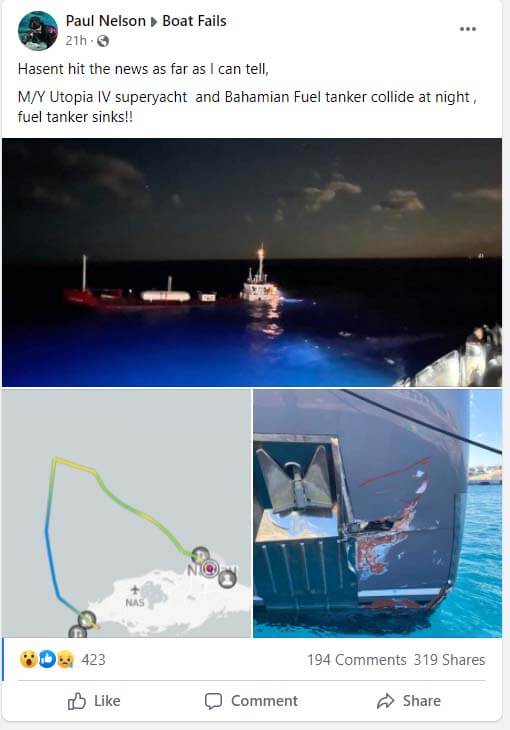 Maritime Management thanked the Bahamian authorities for their support as well as another motor yacht, the M/Y Maya, which responded to the distress call of the tanker and rescued the crew members.

The tanker settled to the bottom at a depth that the operators are reporting means that the vessel can not be safely salvaged. They, however, said the fuel cargo is all “lighter than water and will evaporate if exposed to surface air.”

The Bahamian authorities are investigating the circumstances of the collision.