Britain’s newest flagship and the pride of the Royal Navy, the aircraft carrier HMS Queen Elizabeth is reporting a small number of cases of COVID-19 aboard the vessel after it departed the Mediterranean and ran exercises in the Gulf of Aden as part of the strike group’s global tour.

A spokesperson for the Royal Navy confirmed that approximately 100 sailors aboard the aircraft carrier tested positive for the virus after the carrier departed Cyprus to transit the Suez Canal on its way to the Middle East for joint exercises. The Royal Navy emphasized that the carrier and the strike group remain fully operational and that all the crew have received two doses of the vaccine for COVID-19.

The Queen Elizabeth made a five-day visit to Limassol, Cyprus from June 30 to July 5, as part of the diplomatic role of the world tour. The vessel hosted visitors and several events during its time in port. The Royal Navy reports that as part of routine testing, they discovered the first cases aboard the carrier around July 4, while media reports suggest that other vessels in the strike force have also reported positive tests for the virus.

Steps are being taken to mitigate the spread of the virus. Sailors have been ordered to wear face masks, maintain social distances, and a contact tracing effort was undertaken among the infected crew members. The carrier has approximately 1,600 sailors onboard meaning that less than ten percent has currently tested positive. The total strike group numbers more than 37,000 personnel.

UK defense minister Ben Wallace told the British media that the outbreak is having no impact on the global tour and mission of the carrier and her strike group. The Queen Elizabeth departed Portsmouth, England in May on a 28-week deployment that will cover approximately 26,000 nautical miles.

After transiting the Suez Canal, the carrier joined forces with two U.S. Navy task groups for training and combined naval exercises in the Middle East. HMS Queen Elizabeth was joined by the USS Ronald Reagan carrier strike group and USS Iwo Jima amphibious ready group in the Gulf of Aden. The two-day exercise consisting of the U.K., U.S., and Dutch vessels practiced anti-air, anti-surface, and anti-submarine warfare tactics and techniques. The warships practiced maneuvering in close formation, hunting simulated enemy submarines, and defending against simulated adversaries in the air.

The recent exercises marked the second time this year the Iwo Jima amphibious ready group has operated alongside the UK Carrier Strike Group, following an exercise off the coast of Scotland in May.

HMS Queen Elizabeth is scheduled to proceed from the Middle East into the Indian Ocean before visits in East Asia. 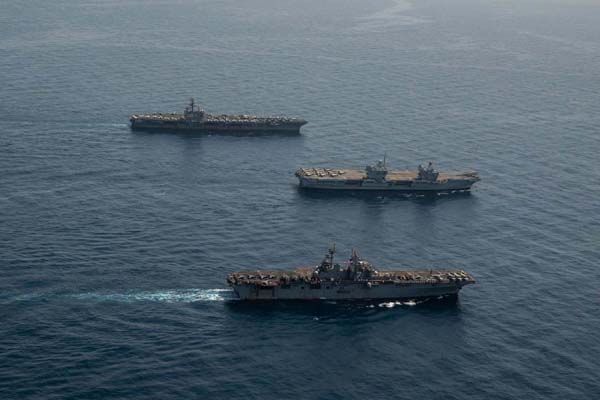