Ports Work to Support Restart of U.S. Cruises with Vaccinations

U.S. ports missing the revenues from the cruise industry are stepping up to support the restart of the cruise ships. The latest efforts coincide with statements from the U.S. Centers for Disease Control and Prevention indicating it would expedite the restart for cruise ships that have vaccinated their crew. The efforts also address one of the issues for the border shipping industry to establish a process to vaccinate crewmembers who will be away from their homes for extended periods of time.

A Florida Public Health Advisory approved by Florida Governor Ron DeSantis and Surgeon General Scott Rivkees, MD issued on April 29 expanding vaccine eligibility to include individuals who are in the state for the purpose of providing goods or services for the benefit of residents and visitors of the State of Florida. Port Canaveral in central Florida became the first to take advantage of the new opportunity followed by PortMiami. In Texas, the Port of Galveston is also working to support the cruise industry to ensure an early restart for local cruise operations.

“We have been working closely with our cruise partners, the Florida Department of Health, and our port community to come up with a plan and timeline of vaccinating cruise ship crews that could begin the process for a safe return to cruising,” stated Captain John Murray, CEO of Port Canaveral. “This expanded eligibility is significantly important for our cruise tourism business, and we’re proud of our efforts to help get this industry up and running.”

Port Canaveral developed its vaccination model in cooperation with the Parrish Healthcare Center at Cape Canaveral, Canaveral Fire Rescue, and cruise lines’ medical personnel. Up to 1,000 COVID-19 vaccination shots per day can be provided to vessel crewmembers, shoreside, and waterside support personnel. Port Canaveral officials consulted with the U.S. Coast Guard, U.S. Customs and Border Protection and cruise line operators, as well as the CDC, to develop its vaccination model to efficiently and expeditiously get vaccines disbursed to crew members and shoreside personnel. Port Canaveral reported that ship operators responded positively to the efforts. They said the first doses were administered on April 30, and while they did not identify which cruise ship participated, the only one in port that day was Disney Cruise Line’s Disney Dream. 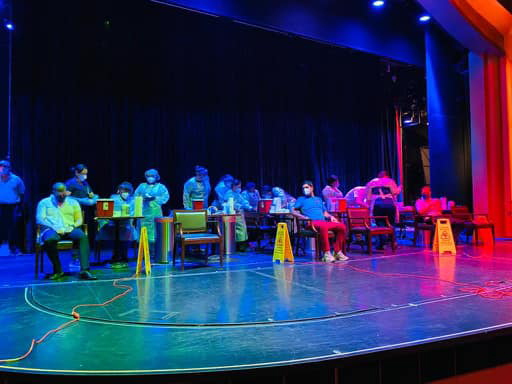 PortMiami, which has already been the site of a pop-up vaccination clinic also rolled out vaccinations for the cruise ships’ crew over the weekend. Announcing the effort with a local health care provider, Miami-Dade Mayor Daniella Levine Cava said they would be prepared to vaccinate approximately 900 crewmembers this week. Royal Caribbean International’s president and CEO Michael Bayley posted pictures of the first vaccinations. He said the crew of the Explorer of the Seas was first and would be followed by the Liberty of the Seas and Celebrity Equinox.

The vaccinations supported the Royal Caribbean Group’s previous statements that all crewmembers on its ships would be vaccinated before the cruises resume. The company has also said that it would require passengers to be fully vaccinated on cruises this summer. On May 1, MSC Cruises issued a statement saying it would also begin a fleet wide vaccination program for its crew. The crew of the MSC Bellissima was vaccinated on April 30 and the company said it would be giving prior to the cruise ships that are resuming service this summer.

After a year’s absence, on May 2 the Port of Galveston welcomed back its first cruise ships in a year. The Carnival Breeze and Carnival Vista drew extensive media coverage and spectators turned out to see the two cruise ships arrive. Galveston reported that it has also made arrangements to start giving COVID-19 vaccinations to the crews as early as today.