PortMiami Sets Cargo Record While Preparing for Return of Cruising

Among all the world’s ports, the ports of Florida have felt the economic impact of the pandemic, and especially PortMiami, which has marketed itself as the cruise capital. Eight months into the pause in the cruise industry, PortMiami’s less discussed cargo operation set new records while the port is also taking steps to prepare for the return of cruising.

More than 50 years ago, when the modern port of Miami was launched, the decision was made to focus on passenger operations and clean cargo. While, the port is most identified with cruising, which is the source of the majority of the port’s revenues, Miami also has a cargo operation that has continued at pace through the pandemic.

In October, PortMiami set a new record for its cargo operations. During the month, more than 107,000 TEUs were handled in the port, an increase of 1.5 percent, making it the busiest month in cargo activity in the history of the port. They attribute the strong cargo performance to a solid balance of global trade and more than $1 billion of completed capital infrastructure improvements. The port’s channel was deepened to handle big ships requiring a 39-foot draft or deeper. To date, the port reports that more than 400 post-Panamax vessels have called due to the completion of the dredging project and the acquisition of new super post-Panamax cranes. 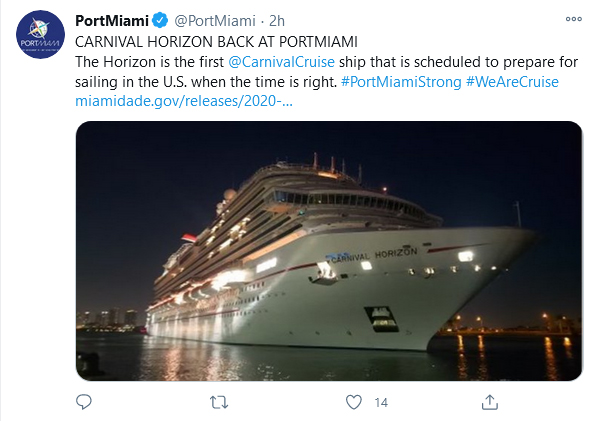 PortMiami on Twitter marking the return of the Carnival Horizon

They are also taking steps to prepare for the eventual return of the cruise industry, signified yesterday by the arrival of Carnival Cruise Line’s Carnival Horizon in PortMiami. She is the first of the line’s cruise ships to return to a U.S. port since the summer months. Carnival had quietly repositioned its ships away from the U.S. not participating in the U.S. Centers for Disease Control's color-coded program launched during the summer governing crew and ship movements.

“We are thankful and excited to have the Carnival Horizon back at PortMiami,” said Miami-Dade's new Mayor Daniella Levine Cava who recently took office. PortMiami noted that it is working closely with the cruise lines on establishing new healthy measures and protocols to accommodate the eventual safe restart of sailing when approved by the CDC.

During the suspension in cruising, PortMiami waived fees for the cruise lines, making the docks available to support the industry. In addition, work is proceeding on the new cruise terminals, including ones for Norwegian Cruise Line, Carnival Cruise Line, Virgin Voyages, and MSC Cruises.

Work has now been completed on Terminal B, nicknamed the Pearl of Miami, built at an estimated cost of $260 million for Norwegian Cruise Line. The terminal had originally been scheduled to open in late 2019, but later delayed till mid-2020. Adelte, the manufacturer of the boarding bridges connecting the terminal to the cruise ships released pictures of the successful test of the bridges.

The port is looking forward to and preparing for a return to normal operations in the future. 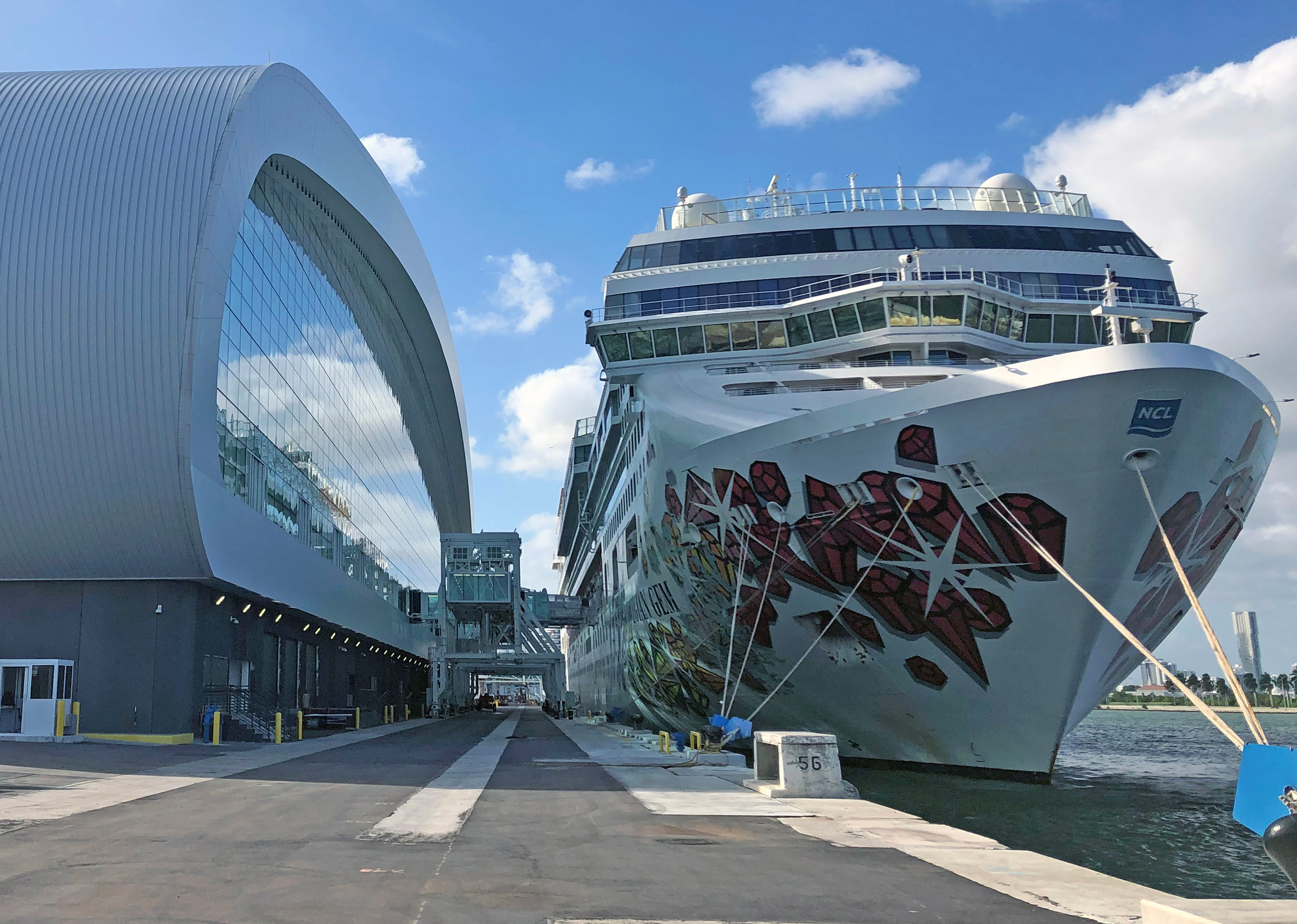 Norwegian Gem alongside the new terminal - photo courtesy of Adelte 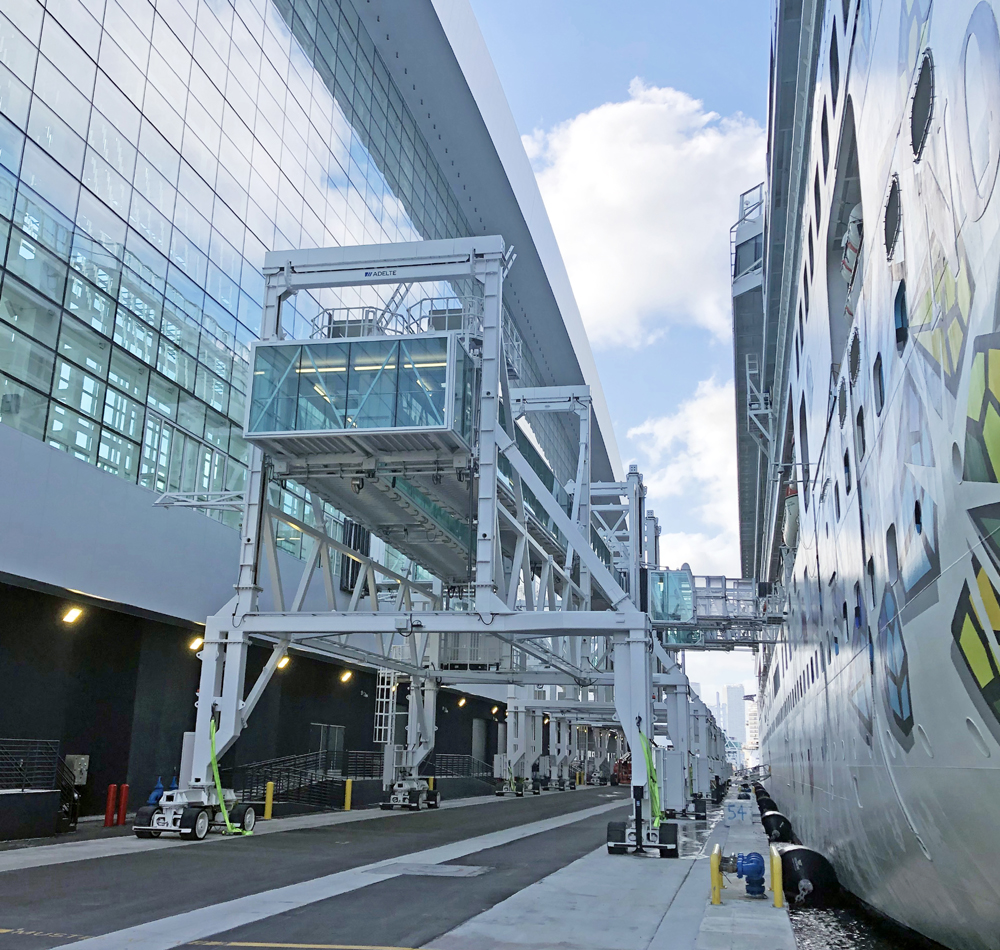