A new phenomenon is emerging in container shipping as the major carriers struggle to manage their schedules in light of the persistent backlogs to enter major ports around the world. Research and advisory services company Sea-Intelligence is calling it “congestion-induced blank sailings,” where the carriers have been forced to blank sailings from their schedule not because of overcapacity but because the ships are not returning in time due to port congestion.

The largest impact is currently on the Asia-North America West Coast trade routes where Sea-Intelligence reports as much as a quarter of weekly capacity is blanked due to the delays throughout the system.  Historically, carriers resorted to blank sailing as a means of controlling overcapacity on a route. Early in the pandemic, this was common with two weeks at over 40 percent of capacity on the Asian routes to the U.S. West Coast. Through the spring of 2020, carriers average nearly a 25 percent cancelation rate according to the data from Sea-Intelligence before they restored capacity. 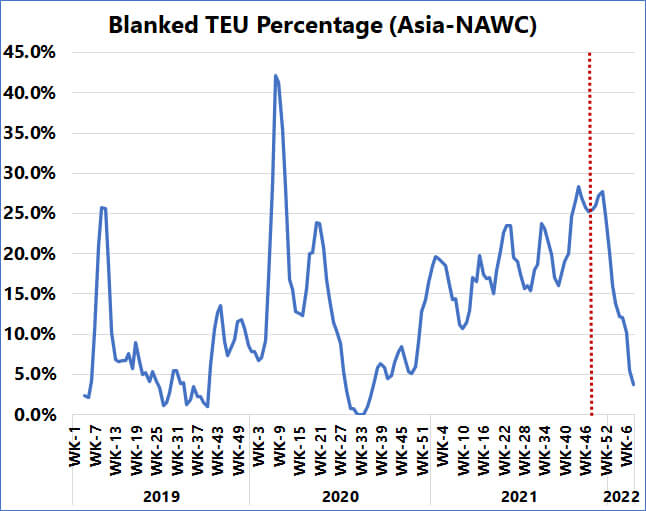 The current trend in blank sailings began early in 2021. While it has been fluctuating, Sea-Intelligence illustrates the trend has been rising through the entire year. For all of 2020, the data shows blank sailings between Asian and the North American West Coast ports average approximately 12 percent of TEU capacity versus an expected average of nearly 20 percent of capacity for all of 2021. Since week 41, the carriers have consistently been blanking more than 20 percent of TEU capacity on these routes and it is expected to remain constant through the end of the year.

“With the North America demand boom and the resulting port congestion, carriers have been struggling to meet their weekly vessel departure obligations, resulting in vessel delays, rolled schedules, and blank sailings,” explains Alan Murphy, CEO of Sea-Intelligence. “This trend has been increasing in recent weeks, with 28.4 percent of the total Asia-North America West Coast capacity blanked in week 44.” Murphy notes these latest cancelations came after Golden Week when ships should not have been impacted by the holiday.

Sea-Intelligence highlights that for the coming 12 weeks, the percentage of capacity blanked is scheduled to decline sharply. This is because blank sailings are not due to capacity management, but rather due to the carriers being forced to blank sailings, as a result of port congestion. Murphy concludes that sailings are mostly not be blanked in advance, but are blanked closer to scheduled departures an operational result of vessel congestion and delays, which cannot be known that well in advance, especially on a trade with a relatively short roundtrip time.

In previous reports, Sea-Intelligence has highlighted that schedule reliability remains at a low point for the container shipping industry. Their data showed that only a third of the containerships were on schedule in October containing at low levels since the summer of 2021.