The crew of a French frigate with Combined Maritime Force (CMF) 150 recently seized about 456 kilos of methamphetamine and 364 kilos of heroin, marking the third CMF drug seizure in the last two months.

On November 18, the French frigate Floréal captured the drugs from a suspicious vessel during a counter-narcotics boarding in the Northern Indian Ocean. The drugs were seized on a route known for smuggling, and the narcotics were openly visible, according to Combined Task Force 150 (CTF 150).

“In less than two months, CTF 150 has successfully intercepted over two tons of methamphetamine and hashish, and over 300kg of heroin,” said the task force’s Commander, Rear Admiral Sulieman Alfakeeh of the Royal Saudi Naval Forces. “I would like to thank all of the sailors from our partner navies, as well as my staff at CTF 150 for making these operations a success, and stopping these drugs from contributing to the funding of criminal activity and terrorism.”

The operation was Floréal's second drug bust this month. She seized more than $8 million worth of hashish from a suspicious vessel on the Arabian Sea’s "Hash Highway" on November 8. The 1.5-tonne haul of hashish was well-hidden on board the vessel, and it took an extensive search to find it.

CTF 150's other assets have also experienced considerable success. The Royal Navy frigate HMS Montrose seized 458 kilos of meth in a bust in mid-October, setting a new record for the task force. Montrose's boarding team conducted the interdiction in rough conditions, and after an extensive search they discovered the drugs hidden in the boat’s cargo. The haul had an estimated wholesale value of $24 million. 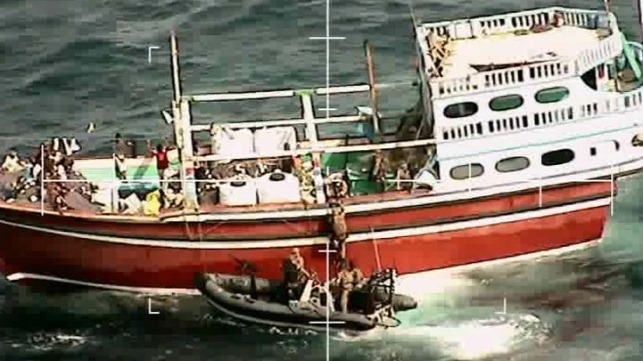 The Combined Maritime Forces (CMF) is a multinational partnership that works to counter illicit activity on the high seas in the Arabian Gulf, the Red Sea, Gulf of Aden, Indian Ocean and Gulf of Oman. CTF 150 is currently led by the Royal Saudi Naval Force.