With fanfare and ceremony, China marked a key milestone in its nearly decade-long effort to develop its domestic cruise ship construction industry. On December 17, the country’s first large, domestically built cruise ship was floated for the first time.

Flooding of the dry dock began yesterday while the cruise ship was decorated with banners. Today, the ceremony included the spraying of water in front of the bow to create a rainbow for good luck. The cruise ship, which is said to be 55 percent complete, is floating and will be repositioned to an outfitting dock where the interior work will continue.

Elaborate planning and review led up to the key step in the construction of the cruise ship, and more important the significant step at the beginning of the country’s entry into the new market. The project to enter the cruise ship construction business began in 2013 followed the next year with an agreement between Carnival Corporation, Fincantieri, and Lloyd’s Register for cooperation to develop the industry. The formal order for two large 135,000 gross ton cruise ships was placed in November 2018 for a joint venture between Carnival Corporation and China State Shipbuilding Corporation (CSSC). 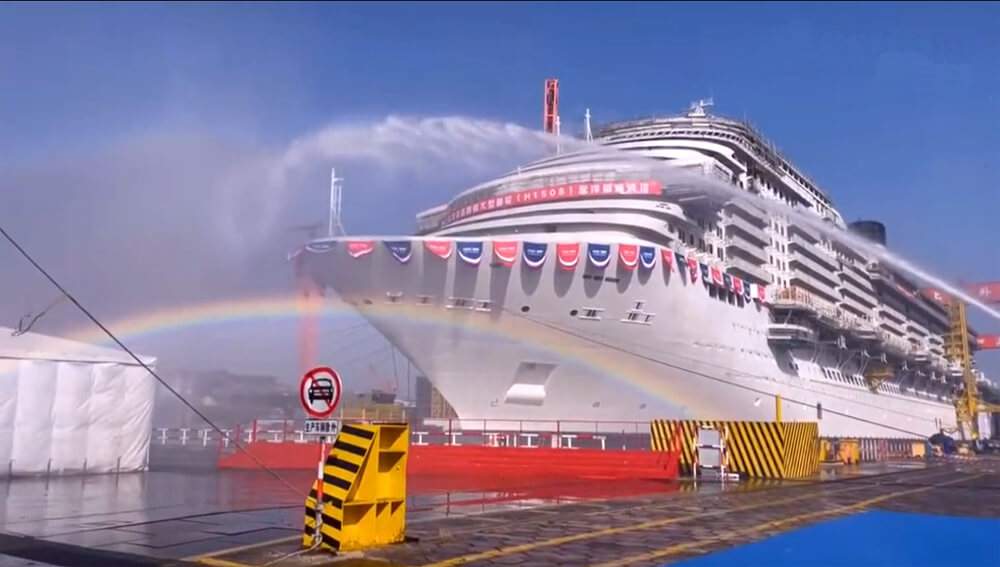 The two cruise ships are based on the Vista class design for Carnival developed by Fincantieri. The Italian shipyard is consulting to CSSC for the project. Each cruise ship will measure 1,061 feet in length with a 122-foot beam and a maximum draft of 28 feet. A 9.6 MW main diesel generator with a total power of 62.4 MW and two 16.8 MW pod propellers will provide propulsion with a top speed of 22.6 knots. The ships will each accommodate up to 5,246 passengers and while the amenities are being adapted to the Chinese market they will include an entertainment area with a large performing arts center, large restaurants, specialty restaurants, various bars, cafes, shopping plazas, art corridors, children's centers, a spa, and water.

“As one of the most difficult ship types to design and build, large cruise ships are the only high-tech and high-value-added ship products that China has not yet been conquered,” said CSSC describing the scope of the construction project. They highlighted that the number of parts and components of the large cruise ship is five times that of other projects. Cabling alone they said reaches more than 2,600 miles and the total working hours for the entire ship is equivalent to 20 times that of a Capesize bulk carrier.

China State Shipbuilding Corporation's Waigaoqiao Shipbuilding cut the first steel for the new cruise ship in October 2019 and began assembly a year ago. The yard has had to develop new facilities for each stage of the project. They expect to deliver the first ship in September 2023.

As the next step in China’s development of its domestic cruise ship industry, last week Italian classification society RINA awarded the first-ever approval in principle for a large cruise ship designed entirely in China. “This is the first large-scale cruise ship with independent intellectual property rights that China has independently developed and designed, breaking the long-term technical blockade and monopoly of foreign countries,” said CSSC receiving the AIP. The design is for a 150,000 gross ton cruise ship measure 1,081 feet by 126 feet CSSC provided few additional details other than saying, “The passenger space ratio, passenger crew ratio, balcony room ratio, passenger public area, speed, load capacity, and other technical indicators have all reached.” They also said that large parts of this truly Chinese developed cruise ship would be supplied from domestic companies as they continue to develop their role in the industry. 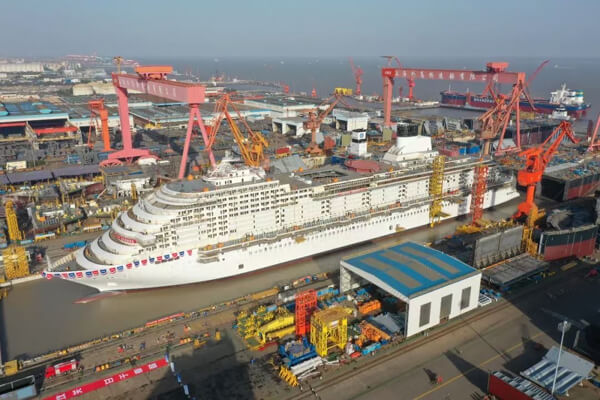 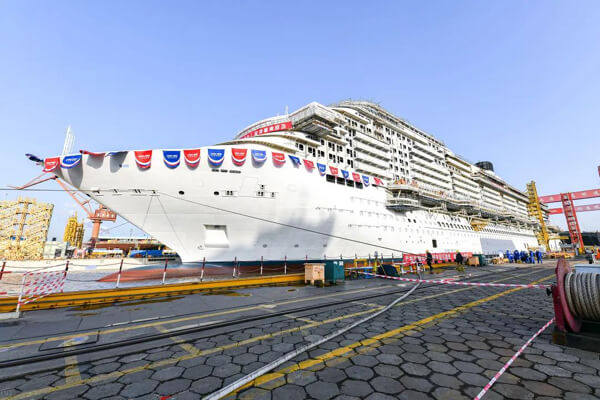