Jumbo is an example of one of the specialized maritime companies that are rising to the challenges presented by offshore wind farms. Jumbo, a specialist in heavy-lift and large, unique cargos that was featured in the new issue of The Maritime Executive, is an example having recently completed the transport and handling of offshore wind turbine foundation components for Ørsted’s Hornsea Two offshore wind farm.

The Hornsea Two project is notable because as part of one of the largest wind farms complexes, the installation project required the largest number of monopiles and transition pieces that Jumbo has ever shipped in a single contract. Each monopile, for example, was between approximately 28 and 31 feet in diameter and weighed up to 1,285 tons. Supporting DEME Offshore, which is carrying out the installation, the project required transporting 141 monopiles and 131 transition pieces from Rostock, Germany and Aalborg, Denmark to Eemshaven, the Netherlands.

Jumbo deployed its K-3000 class heavy lift vessel, the 502-foot long Fairmaster to the project, deciding to specially outfit a single vessel to meet the challenges of the assignment. The vessel with two 1,500-ton cranes provided a flexible deck layout that could offer three different loading configurations, which benefitted the project’s transportation schedule. The vessel was able to switch between five monopiles loaded on deck and in the hold, six transition pieces and three monopolies, or three transition pieces and four monopolies, without requiring downtime for reconfiguration. 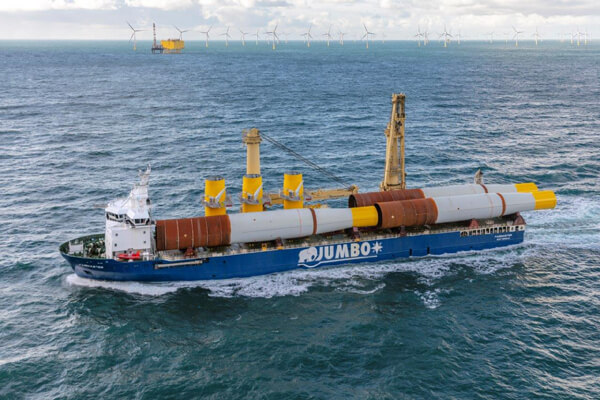 “This engineered flexible solution made it an extremely efficient vessel for the project and is one of the things we’re most proud of,” says Jumbo’s project manager Maarten De Gruyter. “It helped us conclude the project scope within just 37 voyages in just under twelve months.”

The large size of the project meant that Jumbo also had to accommodate adjustments to the schedule which was linked to the delivery sequence from fabrication yards. Jumbo explains that it required close cooperation with DEME Offshore regarding the scheduling, but the flexibility of the vessel permitted them to handle many changes to the sailing sequence and carry more equipment within less time.

“During the planning phase, we designed and engineered the monopile saddles and transition piece grillages to deliver our proposed vessel efficiency. We used inlays in the saddles to accommodate the different diameters of the monopiles. The clearances were tight, sometimes 50cm or less between components,” says De Gruyter. “We also installed project-specific lifting lugs on the deck hatches to speed up loading and unloading operations.”

Ørsted had also set a goal of decreasing the environmental impact of the construction on the Hornsea Two wind farm. Jumbo was required to include a Green Initiative into its project execution and decided to sail with Bio-Fuel Oil from sustainable marine biofuel provider GoodFuels to reduce the emissions from the operation of the Fairmaster.

“We converted the Fairmaster into a kind of ‘Swiss Army knife’ that provided an unrivaled heavy lift vessel intake of large diameter monopiles and transition pieces, but still with the flexibility required for the various lengths and diameters that were to be transported,” says Jumbo’s commercial manager Boudewijn van der Garden. “From tender to project conclusion, Jumbo’s focus was to provide a total solution.”

Jumbo notes that while the scope of this project could be considered to be a straightforward ‘back and forth’ vessel charter contract, it required extensive project planning and focus on the execution to optimize every part of this extensive transport scope. They expect that the offshore wind installation projects will create more opportunities and they are “ready for the next challenge.”