Subsea technology company Ocean Infinity has launched a marine technology and data company, Armada that it says will have the largest fleet of unmanned surface robots in the industry.

Each unmanned surface robot will serve a wide range of industries by being fully equipped to perform a multiplicity of offshore data acquisition and intervention operations down to a depth of 6,000 meters. These robot ships will be capable of remotely deploying a wide range of the latest sensors as well as AUVs and ROVs for visual and acoustic data acquisition.

Armada’s fleet requires neither people on board nor a host vessel nearby. Instead they will be controlled and operated by experienced mariners via satellite communications from onshore facilities in both Austin, Texas, and Southampton, England.

Armada’s fleet is currently under construction and is expected to be deployable by the end of 2020. 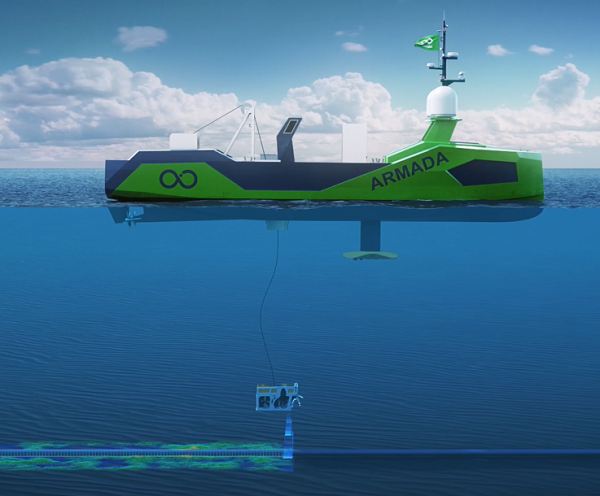 Ocean Infinity says that Armada operations are set to be the safest the industry has seen because no people will be onboard. The fleet approach produces up to 90 percent less CO2 than other conventional survey vessels, says Ocean Infinity, making it the most environmentally sustainable company in the industry.

Last year, Ocean Infinity tested a new technology for AUVs in partnership with Kraken Robotics. The new 6,000-meter pressure tolerant batteries enable greater endurance and efficiency of its HUGIN AUVs, enabling missions to be conducted across a period of more than four days without a battery change. The technology, partnered with Ocean Infinity’s multi-AUV operation, also increases the possible survey range to nearly 700 kilometers per AUV. The technology is expected to reduce launch and recovery operations by 50 percent.