NTSB: Superyacht That Sank a Tanker Did Not Keep Proper Lookout

The collision between a $50 million superyacht and a product tanker off the Bahamas in late 2021 was caused by the failure of both vessels to keep a proper lookout, according to the U.S. National Transportation Safety Bureau (NTSB).

At 1800 hours on December 23, 2021, the tanker Tropic Breeze got under way from New Providence Island, headed on a regular short-haul run to Great Stirrup Cay at a speed of five knots. She was carrying an assortment of MGO, gasoline, LPG and her own bunker fuel, totaling about 150,000 gallons of petroleum products. The master and an AB had the watch. Her equipment was functional, except for her AIS transciever, which was out of service due to a "power issue."

At 2030 hours the same day, the Italian-built superyacht Utopia IV departed New Providence Island, heading for Bimini Island with 12 crewmembers and seven passengers. With a powerful propulsion system, the yacht motored along at 20 knots. Visibility was good, but the vessel's plumb bow made it a wet ride, the yacht's bosun told the NTSB, and bow spray made it challenging to see. In addition, the S-band radar display was out, leaving only the X-band with a range setting of three nautical miles.

Aboard Utopia IV, the master left the wheelhouse at 2148 hours to check on the passengers, leaving the bosun with the conn. Neither were aware that Utopia IV was approaching Tropic Breeze from astern - where the tanker had a radar blind spot.

At about 2200, the master of Tropic Breeze departed the bridge to use the restroom, leaving his AB on the bridge. At 2200:48, Utopia IV's bow struck Tropic Breeze's transom at a relative speed of 15 knots. The Utopia IV's crew were thrown about by the sudden impact, and three sustained minor injuries.

Utopia IV's bow had penetrated Tropic Breeze's aft peak ballast tank, and the water quickly reached the tanker's engine room. Tropic Breeze lost power as the engines flooded, and at 2215, with the tanker sinking by the stern, her master ordered the crew to abandon ship. The vessel slipped below 10 minutes later.

A good samaritan vessel, the yacht Amara, rescued all of the tanker's crewmembers safely with her tender and delivered them to shore on Nassau. The Utopia IV headed into port under her own power, escorted by the Amara. Though Utopia IV suffered $2.4 million in damage to her hull plating, framing, hatches and fittings, her bow showed little visible deformation from the collision. 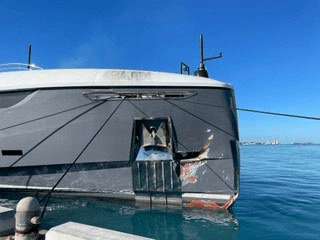 The NTSB noted that under COLREGS, Utopia IV was the give-way vessel, as she was overtaking. The agency determined that the yacht's failure to maintain a proper lookout was the probable cause of the collision.

However, neither watchstanding team had awareness of the other vessel in the minutes leading up to the collision, and NTSB concluded that the Tropic Breeze had also not maintained a proper lookout, contributing to the collision.

"A proper lookout by suitably trained crewmembers is required by the Convention on the International Regulations for Preventing Collisions at Sea, 1972 and is essential in determining the risk of collision," concluded NTSB. "Operators and crews should ensure that vessel bridge teams are staffed with certificated/credentialed mariners who are familiar with all bridge navigation equipment and able to independently take immediate action.?"