Nautilus Minerals has announced that it is looking to secure bridging finance in order to continue the Solwara 1 seafloor mining project planned offshore from Papua New Guinea.

The company requires significant additional funding in order to complete the construction and deployment of the seafloor production system to be used. If unsuccessful in obtaining financial backing, the company will consider suspending or terminating the project and employing financial advisors to assist them in capital restructuring.

Solwara 1 was expected to be the world's first commercial high-grade seafloor copper-gold mine project. The mine site is approximately 30km (18 miles) from shore in the Bismarck Sea in around 1,600m (5,000 feet) of water. The site has indicated resources of one million tons grading 7.2 percent copper, five grams (0.18 ounces) of gold per ton, 23 grams (0.81 ounces) of silver and 0.4 percent zinc. Inferred resources add 1.5 million tons of 8.1 percent copper, 6.4 grams of gold, 34 grams of silver and 0.9 percent zinc.

Nautilus had previously disclosed that the entire seafloor production system would be ready for initial deployment and testing operations during the first quarter of 2018. However, since the necessary additional project funding has not been secured, the company now believes that time frame will not be met.

The company’s plans call for the use of three specially-developed tools to cut and extract high grade copper and gold from the seafloor. Each of the machines, a bulk cutter, an auxiliary cutter and a collection machine, weighs around 250 tons. All three will operate at depths of around 1,500m in temperatures of 2.6 degrees Celsius. The machines are designed to break rock with much greater force than land machines and must operate at low temperatures to avoid overheating.

The auxiliary cutter is designed as the pioneering tool which prepares the rugged sea bed for the more powerful bulk cutter. These two tools gather the excavated material; the third, the collecting machine, will collect the cut material by drawing it in as seawater slurry with internal pumps and pushing it through a flexible pipe to the subsea pump and on to the vessel via the riser and lifting system.

The machines will be remotely controlled from a purpose-built vessel with a crew of around 130 people. Steel cutting for the vessel took place in September at China’s Fujian Mawei Shipbuilding.

When completed, the vessel will measure 227m (750-foot) in length and 40m (130-foot) in width with accommodation for up to 180 people. It will generate approximately 31MW of power. All of the mining equipment will be installed in the vessel during the build process to minimize the equipment integration to be completed following delivery of the vessel. The vessel is scheduled for delivery in 2017. 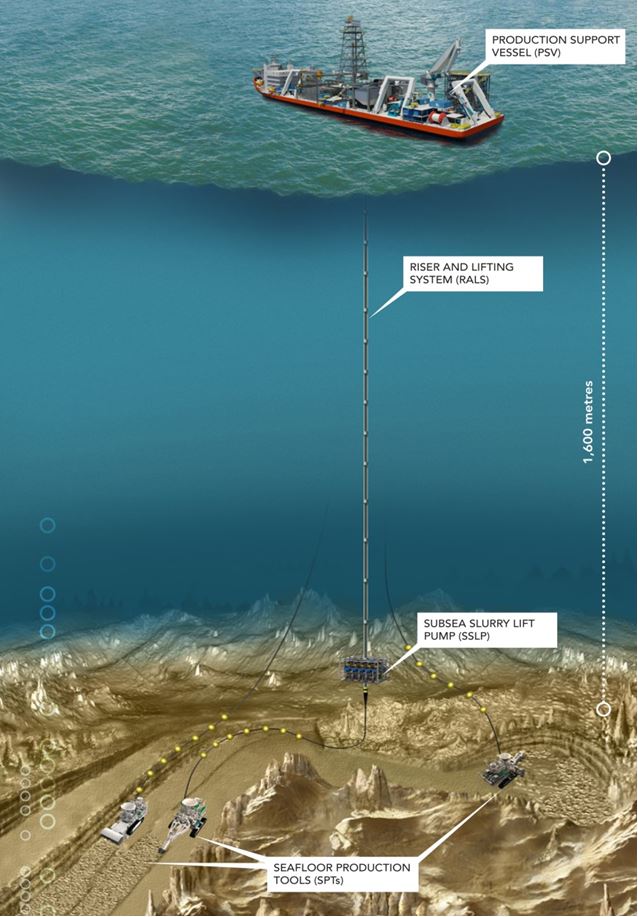