A team from NASA has spent three weeks at Australia’s Casey research station in Antarctica testing a robot bound for Jupiter's moon Europa.

The buoyant robot's full mechanical capabilities were tested rolling around on the underside of sea-ice, and its endurance was tested by leaving it hanging under the ice for 48 hours.

An additional wheel and thrusters may now be added as a result of the tests.

The robot has two independent wheels to maneuver under the ice and a suite of sciencific instruments to take samples of the ice-water interface, amassing information on dissolved oxygen, conductivity, temperature and depth.

NASA is preparing to travel to Jupiter within the next decade to better understand the planet and investigate one of its icy moons, Europa.

It’s hoped a future version of the robot will be on the mission to explore the salty oceans of Europa and potentially find life beneath its 10 kilometer-thick icy crust. The challenge on Europa will be drilling through a 10-20 kilometer crust before the water can be reached to deploy the rover.

“We don’t really know how to manage this yet,” says NASA Jet Propulsion Laboratory engineer Dr. Andy Klesh. “It’s likely we will have to drop transmission pucks every 100 meters to carry signals from the rover up to a surface base station, before the information is beamed back to Earth via satellite.”

The robot has already been tested in the Arctic and Alaska, this was it’s first Antarctic trial. 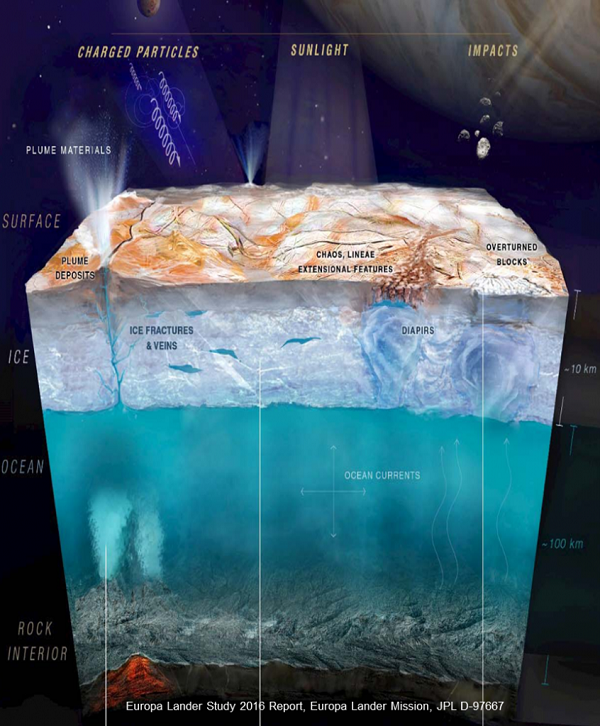 Europa in cross-section showing processes from the seafloor to the surface of the moon (Photo: KP Hand et al/NASA)