The MSC World Europa measures 1,094 feet in length and features 20 decks. The ship offers 2,626 passenger cabins which give it a capacity of 6,762 passengers with a crew of 2,138. Only Royal Caribbean has completed cruise ships over 200,000 gross tons while Carnival Corporation’s largest platform is the 180,000 gross ton Excel LNG-fueled class built for brands including Carnival Cruise Line, AIDA, Costa, and P&O. Genting’s Dream Cruises was building the Global Dream as another cruise ship over the 200,000 gross ton mark before the company’s financial collapse leaving the fate of the vessel uncertain.

“MSC World Europa represents a major step forward for our Cruise Division, the entire MSC Group, and our industry, with a range of unprecedented innovations in terms of environmental and marine technologies, design, and guest-centric features,” said Pierfrancesco Vago, Executive Chairman of the Cruise Division of MSC Group. “This is the result of more than four years of work between us, builders Chantiers de l’Atlantique, and numerous leading providers of next-generation environmental and maritime technologies and solutions as well as many thousands of hours of training for those onboard and at ports.” 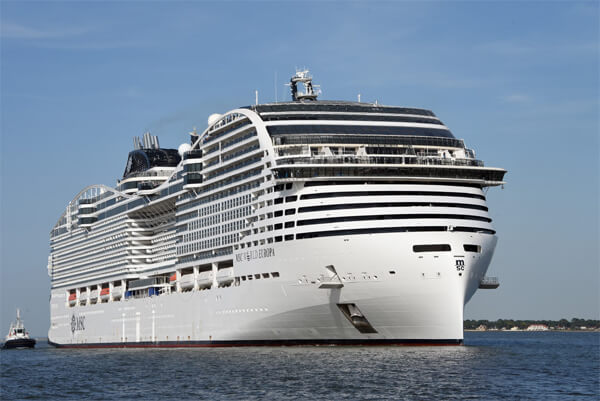 In addition to a dual-fuel power plant using LNG or Marine Gas Oil, the MSC World Europa is the world’s first contemporary cruise ship to feature solid oxide fuel cell (SOFC) technology powered by liquefied natural gas. The ship is outfitted with a 150-kilowatt SOFC demonstrator that will use LNG to produce electricity and heat by means of an electrochemical reaction. According to the companies, it will be a testbed to accelerate the development of fuel cell technology for contemporary cruise ships and offers the potential to enable hybrid propulsion solutions in the future.

The MSC World Europa also incorporates a wide range of equipment to optimize energy use throughout the ship. These include smart ventilation and advanced air conditioning systems, with automated energy recovery loops, allowing effective distribution of heat and cold across the ship. The ship uses LED lighting throughout, controlled by smart management systems to further enhance the energy-saving profile. It will also be fitted with enhanced automatic data collection systems for remote energy monitoring and advanced analysis, allowing real-time shoreside support to optimize operational efficiency onboard.

The cruise ship is also equipped with an advanced wastewater treatment system (AWTS) as well as a selective catalytic reduction (SCR) system that reduces NOx emissions by 90 percent when LNG is not available. The hull was designed with an innovative shape to minimize resistance through the water and also to minimize acoustic underwater sound impact, reducing the potential impact on marine mammals in the surrounding waters.

Passengers sailing on the cruise ship will experience several new amenities. The aft superstructure is designed in a Y-shape to create a 350-foot half-open/half-covered promenade with ocean views and balcony cabins overlooking the area. It is also the location for the longest at sea, 11-deck-high, slide. Other elements for passengers include a micro-brewery, gin bar, healthy juice bar, coffee emporium, and teahouse. The ship has 13 different dining options.

The MSC World Europa becomes the twentieth cruise ship in the company’s fleet. She will be named in Doha, Qatar on November 13 and has been chartered to be a hotel during the World Cup matches. She begins cruising on December 20 sailing to Abu Dhabi, the UAE, and Saudi Arabia, before repositioning to the Mediterranean in March 2023.

Simultaneously with the delivery of the MSC World Europa, the shipyard also marked the first steel cutting for a sister ship. The cruise line announced that the second ship of the class will be named the MSC World America. The second cruise ship will enter service in 2025 home porting in North America as part of the cruise line’s continuing expansion of its operations with five cruise ships scheduled to be sailing from U.S. ports.