As global energy demand rises, the market for LNG continues to expand. Set to increase by 50 percent between 2015 and 2020, the LNG market is one of the fastest growing in the world.

Despite the cost of developing new liquefaction and regasification infrastructure, LNG trade is set to increase by 50 percent over the next few years.

This spectacular growth is transforming the market, with many new companies entering the sector and changing the industry landscape. Kerry-Anne Shanks, Head of Asia gas and LNG at Wood Mackenzie, foresees a rise of new LNG buyers in Asia.

In 2016, Asia's emerging LNG buyers contracted nearly 18 million tons of LNG supply. This is over 60 percent of new contracts globally. Contracts taken up by new Asian buyers were three times as much as those contracted by Asia's traditional buyers.

Market liberalization is the first reason, says Shanks, as it allows more players the right to contract LNG. Buyers are also attracted by cheaper and more flexible LNG supply deals.

“2017 will test the resolve of Asian policy makers to open up their gas markets. Japan opens its gas market to competition in April, and we’ll be watching whether China’s new third party access regulations translates into improved infrastructure access,” she says. “If this happens China should overtake South Korea to become the second largest LNG market this year.” 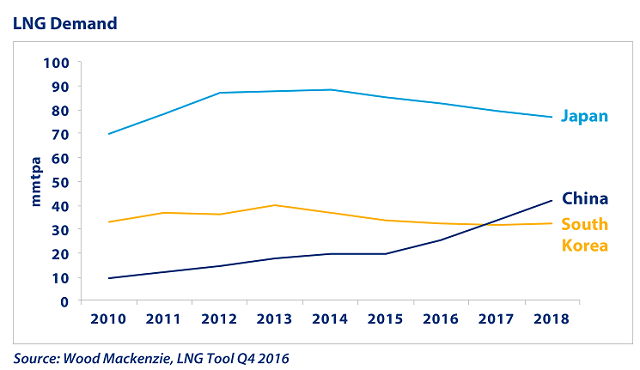 The outlook for LNG remains uncertain in Vietnam. No significant progress has been made in developing proposed regas terminals. Wood Mackenzie forecasts LNG imports only beginning in 2023 to fill the gas supply-demand gap created by the decline in domestic gas production.

The Philippines looks set to import its first LNG cargo in 2017. Longer-term LNG demand will be driven by the requirement to replace declining gas production, says Wood Mackenzie.

The second half of 2016 saw a remarkable rise in spot LNG prices especially in Asia. Despite the start of eight LNG trains in 2016, supply has at times been insufficient due to unplanned supply outages coupled with strong demand from a warm summer and cold winter. As a result, spot LNG prices in Asia rose from a low of US$4.5/mmbtu to almost US$10/mmbtu by December 2016.