Three new low profile Neo-Panamax cranes have begun their journey to Boston from Shanghai, China as the latest step in the Massachusetts Port Authority (Massport) efforts to expand operations and improve capabilities to handle larger ships in the port of Boston. They have invested more than $850 million into efforts around the port, which includes these cranes along with a new berth and a deepened Boston Harbor, to give the port the capability to handle larger vessels and facilitate future growth.

The container operation at Boston’s Conley Terminal is the only full-service facility in New England. It was designed for 5,000 TEU vessels but can handle ships up to 10,000 TEUs under certain conditions. The current investments are being undertaken to give the port the ability to consistently handle 12,000 to 14,000 TEU vessels.

“The port being big ship ready comes at a critical time as the region’s economy recovers from the impacts of the pandemic,” said Massport CEO Lisa Wieland. “Massport’s investment in the future of Conley Terminal shows our commitment to support the New England importers and exporters that rely on the Port, as well as the thousands of workers across the Port.” 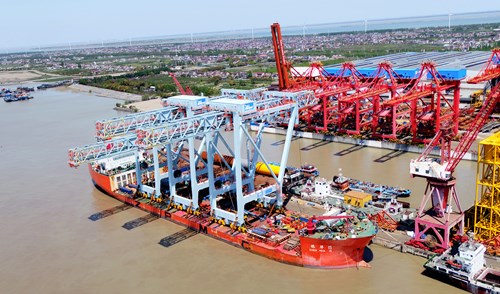 Once in operation this fall, the new cranes will be servicing vessels at the new Berth 10 which was completed in 2020 to accommodate larger ships. The berth is 1,250 feet long and dredged to 50 feet. With the new cranes and berth, Boston will be in a position to offer some relief to an already stressed industry and increase productivity for shippers in the region says the port authority.

The port’s capabilities will be further enhanced in 2022 with the completion of the Boston Harbor Dredging Project. The $350 million project is a collaboration between the Army Corps of Engineers, the Commonwealth of Massachusetts, and Massport. To accommodate larger ships, the Outer Harbor Channel was dredged from 40 to 51 feet, the Main Shipping Channel, from 40 to 47 feet, and the Reserve Channel, where Conley Container Terminal is located, from 40 to 47 feet. Additionally, the Army Corps expanded the Harbor’s Turning Basin to 1,725 feet.

Additional improvements to modernize Conley Terminal have recently been completed or are in progress, including the creation of a dedicated truck roadway that provides a more efficient route for trucks to get to and from the interstate, new rubber-tire gantries, expanded container storage, and other landside improvements.

After a very popular debut last September, the UK’s only float-in cinema is back, bringing waterborne, COVID-safe entertainment to London. Last year, the venue counted over 12,000 attendees in just a span of four weeks. The float-in cinema experience is set to return to the Regent’s Canal this spring. "We are so excited to be back for the second year with the UK's first-ever float-in cinema," said James Greenhalgh, co-founder of Openaire. "It’s not easy to pull...