Exxon Mobil Corporation and Hess have made a final investment decision on the first phase of development for the Liza field, one of the largest oil discoveries of the past decade, located offshore Guyana in South America.

Exxon also announced positive results from the Liza-4 well, which encountered more than 197 feet (60 meters) of high-quality, oil-bearing sandstone reservoirs, which will underpin a potential Liza Phase 2 development. Gross recoverable resources for the Stabroek block are now estimated at two billion to 2.5 billion oil-equivalent barrels, which includes Liza and other successful exploration wells on Liza Deep, Payara and Snoek.

The Liza Phase 1 development includes a subsea production system and an FPSO designed to produce up to 120,000 barrels of oil per day. Production is expected to begin by 2020, less than five years after discovery of the field. Phase 1 is expected to cost just over $4.4 billion, which includes a lease capitalization cost of approximately $1.2 billion for the FPSO facility, and will develop approximately 450 million barrels of oil. 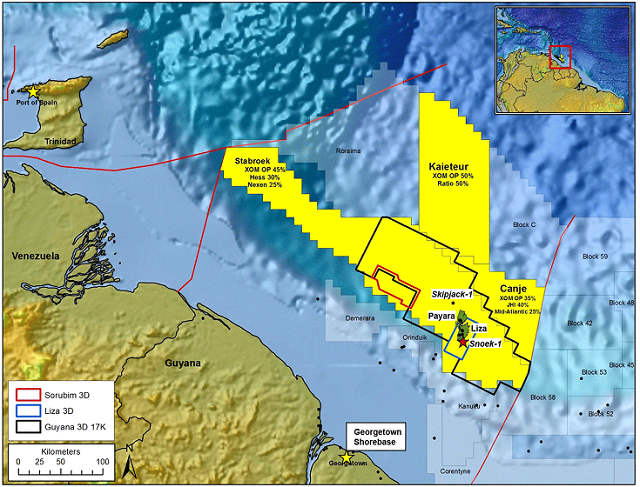 The development has received regulatory approval from the government of Guyana.

Pablo Medina, Wood Mackenzie's senior analyst, Upstream, Latin America, said: “The short time it took ExxonMobil to go from Liza's discovery to declaring Final Investment Decision signals the competitiveness of the project, both within the company's portfolio and globally. Liza-Payara has  a breakeven of $46/bbl (Brent; using a 15 percent discount rate), which puts it in a very attractive position compared to other leading investment opportunities such as tight oil or deepwater Brazil. Very few deepwater projects have been pushed through FID during the oil price downturn. Only the very best projects have been sanctioned and this speaks volumes of Liza's potential.

“We currently forecast the full development of Liza-Payara will produce over 330,000 b/d of oil at peak, with reserves of over 1.5 billion barrels of oil equivalent (bn boe). The successful exploration campaign has also led to the discovery of almost three trillion cubic feet of associated gas. The full development solution will need to address the challenge of gas monetization, given the field's remoteness from the coast and the lack of a gas market in Guyana.

“Guyana will have the task of managing the complexities of developing its first oil and gas field. Within 10 years, we expect the Liza-Payara development to produce 330,000 b/d –allowing Guyana to join the ranks of other Latin American producers, where legacy production has been in steady decline.”