Maersk Supply Service, the offshore marine services provider to the energy sector, recently completed the hybrid power conversion and other upgrades to one of its deep-water anchor handling tug supply vessels. The Maersk Minder is now believed to be the world’s first hybrid-electric anchor handler and a demonstration of the possibility of converting to more environmentally-friendly technologies.

The four-year-old vessel arrived at the Fitjar Mekaniske Verksted shipyard facility in Norway at the end of March 2022 to begin a two-and-a-half-month conversion. The vessel was fitted with a Wartsila container-based hybrid power system. The battery system is comprised of an energy storage system, consisting of 132 smaller batteries, and a transformer, which is controlled and monitored via an energy management system.

Now fully fitted and functioning, Maersk reports that the Wärtsila HY system is expected to reduce the anchor handler’s fuel consumption and its emissions by 15 percent, as well as reduce the vessel’s maintenance needs and improve her operational performance. One of the advantages of the hybrid system is the facilitation of peak shaving, meaning the batteries can deliver extra power quickly to avoid spikes in power consumption. This leads to a significant efficiency improvement since the motors can run with optimal load and use the batteries to absorb a large part of the load fluctuations. As built, the 5,000 dwt vessel was powered by five medium-speed engines with a total output of more than 23,000 horsepower. 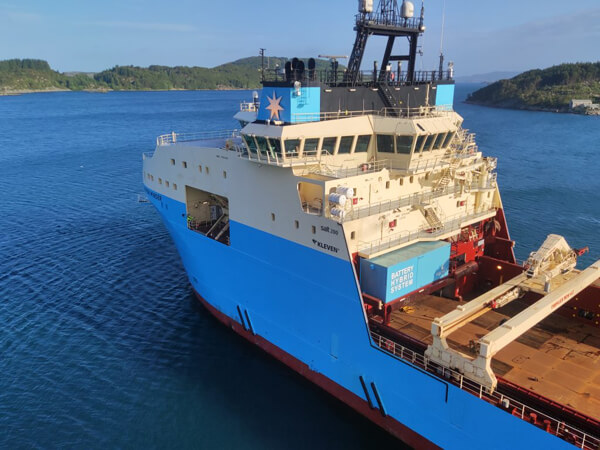 During six days of sea trials which commenced on June 11 off Bergen, Norway, Maersk reports the vessel underwent extensive testing to confirm the performance and safety of the systems.  They undertook fine-tuning of the Wartsila battery system as well as technology provided by Kongsberg Maritime, and after a rigorous testing process, they reported that the vessel was ready to resume service. They expect no loss of power while also generating significant savings in fuel and the resulting reduction in emissions.

“The installation of this battery system is a significant step for Maersk Supply Service and demonstrates our commitment to decarbonizing our fleet,” said Mark Handin, COO at Maersk Supply Service. “As we continue to follow an “every step matters” approach, this represents an important milestone in our long-term journey towards carbon-neutral operations.”

The battery system was not the only upgrade fitted on the Maersk Minder as they used the opportunity to upgrade other systems on the vessel. A Selective Catalyst Reduction system was installed for the exhaust from the five diesel engines. The SCR system works by mixing a urea solution with the exhaust fumes, creating a reaction that removes the nitrogen oxides from the flue gas stream with the company expecting NOx emissions will now be reduced by an average of 80 percent and bringing the vessel in line with Tier III emissions standards.

Maersk Supply Service has set ambitious targets to halve its carbon intensity by 2030 and reach net-zero operations by 2040. The hybrid power system is part of the company’s exploration of new technologies which they are seeking to combine with behavioral optimization and biofuels as part of an overall strategy to achieve their decarbonization objectives.