Fueled by the nearly year-long boom in imports, the Port of Los Angeles has become the first port in the Western Hemisphere to process 10 million container units (TEUs) in a 12-month period. The port marked the milestone with a ceremony today, June 9, alongside the symbolic loading of a container aboard the CMA CGM Amerigo Vespucci.

When the Port of Los Angeles completes its 2020-2021 Fiscal Year on June 30, it is expected to have processed more than 10.8 million TEUs.  That will represent a better than 17 percent increase in volumes from the 9.2 million TEUs that passed through the port last fiscal year and nearly a 14 percent increase over the port’s previous highest annual container volume on record of 9.5 million TEUs in 2018.

According to port officials, the increase in volume is being driven by a pandemic-induced consumer buying surge that began last summer, along with the restocking of retailer shelves and e-commerce warehouses across the country. Over the past 12 months, the terminals at the Port of Los Angeles have worked an average of 15 containerships each day, up from a pre-pandemic average of 10 ships a day. Longshore labor shifts are up nearly 20 percent in 2021 compared to the average weekly shift count over the past four years.

“Stacked end-to-end, 10 million containers would circle the world one and a half times,” said Los Angeles Board of Harbor Commissioners President Jaime Lee during today’s event. “It’s a lot of cargo to handle by any measure. We are deeply grateful to the longshore workers, truckers, terminal operators, shipping line partners, and all of the stakeholders that have made this remarkable achievement possible, particularly in the face of an unprecedented pandemic.” 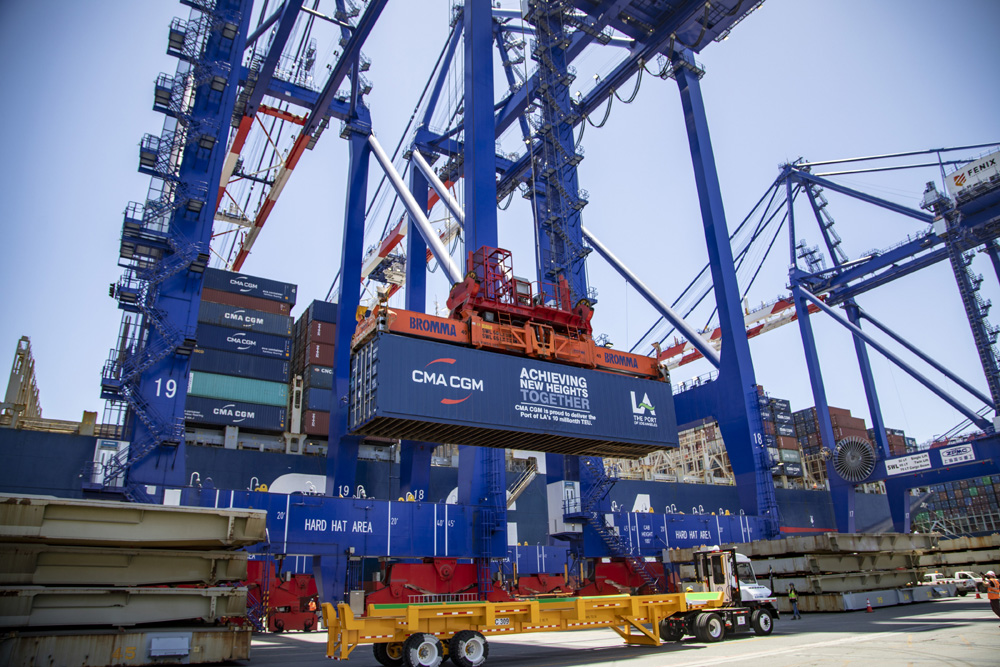 The current year has been a particularly challenging one for operations at the Port of Los Angeles and throughout the San Pedro port complex. The continuing inflow of containers strained the ports’ resources and by late January congestion and bottlenecks were being highlighted. At its worst, more than 60 ships were at anchor in San Pedro Bay with ships reporting waits nearing 10 days to reach the terminals. The backlogs have been addressed and currently the Port of Los Angeles is reporting that 10 vessels are waiting at anchor with an average of 4.9 days.

The current disruption in the southern Chinese ports may also impact Los Angeles in the coming weeks.  Despite the challenges, Port Executive Director Gene Seroka predicts a strong future. “With our sustained focus on supply chain digitalization, infrastructure investments, and strong business relationships, we have the opportunity to build on this historic milestone,” said Seroka at the event.

Today’s ceremonies featured the 13,444 TEU containership which is from the fleet of the port’s largest shipping line customer, the CMA CGM Group. Representative of the activity at the Port of Los Angeles, the 11-year-old vessel, registered in Malta, is operating on a route coming from Nansha, Yantian, and Xiamen in China.