An LNG carrier completed what is being called the world’s first transoceanic voyage of a large merchant ship employing autonomous navigation technologies. The voyage was carried out as the first demonstration of the advanced technology navigating the 97,500 dwt vessel for roughly half its voyage across the Pacific, or approximately 5,400 nautical miles avoiding over 100 ships and optimizing the voyage.

The Prism Courage, a 180,000 cbm LNG carrier built by Hyundai Heavy Industries and delivered to SK Shipping of South Korea in 2021 completed the voyage arriving today, June 2 at the Boryeong LNG Terminal in South Korea. The voyage lasted 33 days departing the Freeport LNG Terminal in Texas on May 2 and navigating through the Panama Canal and across the Pacific. The total voyage was nearly 11,000 nautical miles.

The vessel is equipped with the second level of the autonomous navigation system developed by Avikus, a subsidiary of HD Hyundai launched in December 2020 specializing in autonomous navigation. According to the company, the HiNAS 2.0 navigational system creates optimal routes and speeds based on Hyundai Global Service’s Integrated Smartship Solution. Its artificial intelligence recognizes the surrounding environment, such as weather and wave heights, and nearby ships, and then controls the vessel’s steering commands in real-time. The Level 2 technology can control and operate the ship versus the earlier Level 1 which provides the optimal routing.

During the voyage, the Prism Courage was operated autonomously creating the optimal route and also recognizing other vessels nearby, and plotting courses to avoid a collision. They are reporting that the result was a seven percent increase in fuel efficiency which reduced greenhouse gas emissions by five percent.

In addition to the fuel savings, the company is promoting other benefits of autonomous navigation. They highlight the technology as helping to address the shortage of crewmembers for ships as well as improving the safety of operations by reducing human errors in navigation. 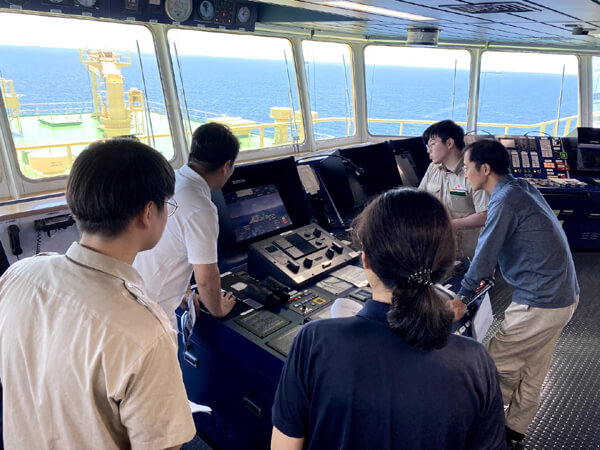 Team observing the autonomous navigation operations during the crossing (Avikus)

They are highlighting research from Acute Market Reports saying the market for autonomous navigation ships and related equipment market is expected to grow at an average annual rate of 12.6 percent, reaching $235.7 billion in 2028. The South Korean test of the technologies follows a series of demonstrations conducted earlier this year by Japan using ferries and containerships for coastal voyages as well as demonstrating autonomous docking and departures from port. Previous tests used tugboats in busy harbor settings. China reported putting the first short-sea autonomous vessel in service while in Norway they are beginning two years of testing on the Yara Birkland to gradually move to full automation and earn certificates for autonomous navigation. Other autonomous navigation vessel projects are also under in Norway planning transportation of goods short distances to replace road transportation.

The voyage was conducted under real-time monitoring with the American Bureau of Shipping and the Korea Register of Shipping to verify the performance and stability of the technology. Avikus reports that it plans to commercialize HiNAS 2.0 within this year after receiving a certification from ABS for the results of this self-propelled ocean crossing.