As ports around the world compete to build their LNG bunkering capabilities, the United States recently marked a key milestone as part of the shipping industry’s increasing use of the LNG. The first LNG refueling of an internationally-flagged ship took place in the Port of Jacksonville, Florida. The effort required the coordination of several partners, but demonstrates the growing capabilities to supply LNG which is widely viewed as a next-generation fuel source for the maritime industry.

The Fure Ven, an 18,000 DWT dual-fueled vessel owned and operated by Furetank of Donsö, Sweden, an operator of product and chemical tankers, transited the St. Johns River on September 1, calling at JAXPORT’s Talleyrand Marine Terminal, which serves Crowley Maritime Corporation. The Fure Ven is one of Furetank’s V-Series, a new generation of product and chemical tankers introduced in 2018.

At the terminal, 225 metric tons of LNG was transferred to the vessel from Eagle LNG Partners on-site storage facility. The bunkering process required less than seven hours to complete. The product tanker loaded with a diesel fuel cargo departed later that day bound for Arendal, Norway. 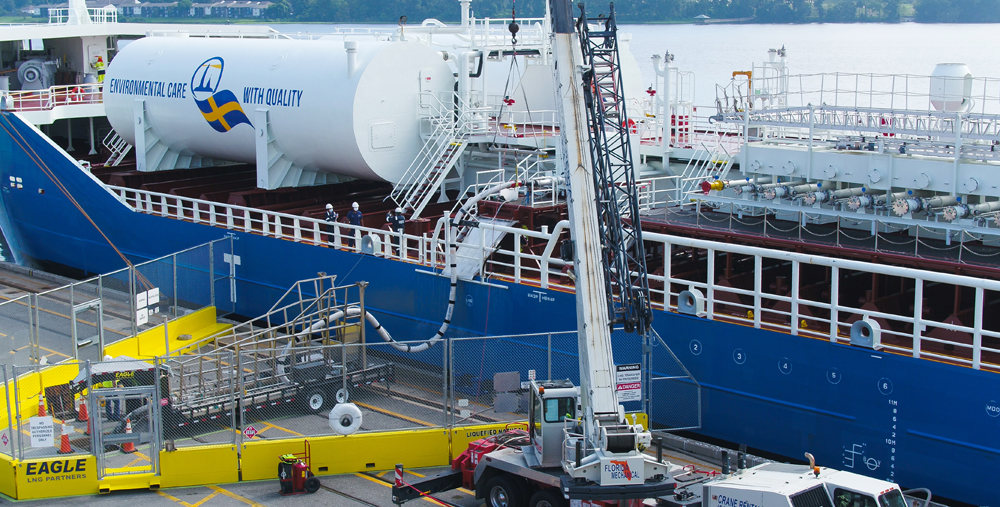 While it seems like a simple enough process, it became the first non-U.S. flagged vessel to bunker LNG in the United States. Eagle LNG became the first supplier to complete the delivery and It was also the first time the GAC Group brokered a deal to supply LNG as a marine fuel.

“We note with pleasure that LNG bunkering is becoming available in more and more places, not least the U.S., and we are confident that investing in the V-series particularly contributes to a cleaner environment worldwide,” said Lars Höglund, CEO of Furetank.

According to all of the parties involved, this milestone is the latest tangible demonstration of LNG as a safe and reliable fuel solution. They hope it builds confidence in the case for LNG to help the shipping industry meet environmental regulations and paves the way for more internationally trading vessels to bunker at Jacksonville Port Authority (JAXPORT).

“The team at Eagle LNG is proud to have partnered with Furetank and GAC, along with numerous stakeholders including JAXPORT, Crowley Maritime and the U.S. Coast Guard, to safely accomplish this first-ever LNG bunkering of a foreign-flagged tanker in the United States,” said Sean Lalani, President of Eagle LNG. “It is only fitting that this first bunkering in the United States happened in Jacksonville where JAXPORT, local officials, and the community have embraced the shipping industry’s transition to the more sustainable, affordable LNG.”

Other ports across the United States are also expected to enhance their LNG bunkering capabilities to serve the growing number of ships expected to operate on LNG.

Borr Drilling has become the latest company operating in the oil and gas sector to complete a refinancing designed to improve liquidity and address financial pressures brought on by the continuing weakness in the sector. Headquartered in Norway, Borr owns and operates jack-up rigs providing drilling services to the oil and gas exploration and production industry in water depths up to approximately 400 feet. Discussing the business and its outlook at the end of the third quarter in November 2020,...