Japan is a major supporter of the development of ammonia as the emerging front-runner for alternative fuel. The government is encouraging and funding a broad range of programs across industries and in the latest development, two of Japan’s leading shipping companies are reporting progress.

The goal is to have a commercial alternative available by the middle of this decade. The shipping companies have been focusing on the designs needed for new commercial vessels fueled by ammonia as well as the technologies to provide the bridge from current fuels to alternatives. Among the early projects already planned is the conversion of a tug by NYK to provide a model for ammonia operations.

As a next step in the development of the new technologies, NYK work with MTI and Elomatic have completed the concept design phase of a new Capesize bulk carrier and a very large crude oil tanker. They are building from the widely used LNG systems to develop designs for vessels that can be efficiently converted to ammonia-fueled vessels. Working to develop ammonia-ready vessels they believe will provide the next-bridge solution for the realization of future zero-emission vessels.

In this phase of the project, they developed a “concept design” that includes ship specifications such as overall length and width, load capacity, voyage distance, and to build a future vessel.

The companies are highlighting a series of challenges that they are working to overcome to provide ammonia-fueled vessels. The extreme toxicity of ammonia will have a major impact requiring new approaches for bunking the vessel and handling fuel. The lower energy density of ammonia compared to LNG, for example also requires a larger fuel tank capacity to maintain the same level of endurance for the vessel. That, however, would impact the space for cargo loading, as well as the loadable cargo weight. A bigger fuel tank and additional fuel tanks will also affect ship stability and hull strength. 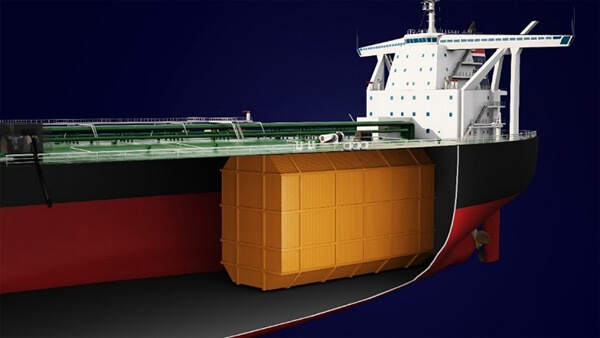 The companies report that have been able to address these issues by preparing design concepts for fuel-tank layout and other specifications of the ship. By incorporating these elements into the LNG-fueled ship they believe the cost of converting ships from LNG to ammonia can be reduced by 12 percent for the Capesize bulker and by 25 percent for the VLCC. In the future, the three companies will proceed with the actual design of an ARLFV with shipyards and marine equipment manufacturers.

While NYK has been focusing in its collaboration on making vessels ammonia, ready, Kawasaki Kisen Kaisha (“K” Line) is moving forward with its designs for ammonia-fueled newbuilds. Working with ITOCHU Corporation, Nihon Shipyard Co., Mitsui E&S Machinery Co., and NS United Kaiun Kaisha, they are reporting that a design has been developed for a 200,000 dwt ammonia-fueled bulk carrier.

They are reporting that their design has obtained an Approval in Principle (AiP) from ClassNK (Nippon Kaiji Kyokai). Like others pursuing the development of ammonia-fueled ships, they noted the lack of international guidelines for the use of ammonia as a marine fuel. They are using their studies which they hope will provide the framework for international standards. K Line is aiming for the commercial introduction of its ammonia-fueled large bulker by 2026.