Italian maritime authorities have agreed to let the migrants and refugees crammed aboard an OSV operating as a rescue vessel disembark in Sicily. They had been living aboard the vessel for more than a week while the NGO managing the rescue operation was calling on the European Union to intervene for the safety of the people.

The NGO SOS Mediterranee announced on the evening of July 8 that the 2,600 dwt tug Ocean Viking registered in Norway had received word from the Italian authorities. The vessel docked at the port of Augusta on the island of Sicily early on July 9 with the NGO Tweeting out a message saying, “It's an immense relief to know that their plight at sea is almost over and that the six rescues will finally be completed soon.”

The vessel had set out from Marseille, France on June 27 on its mission to rescue individuals often in small, wooden boats trying to escape the violence and unrest in Libya. The tug made its first rescue on July 1and a second one on July 3. At that point, with 65 people aboard, the vessel had asked for permission to land them in a European port, but before it received word from the authorities the Ocean Viking performed its largest rescue since it began its mission for SOS Mediterranee. In one rescue that took over five and a half hours, the crew took aboard 369 men, women, and children that had been crammed on a large wooden boat which the crew believed was at risk of capsizing. Two other rescues in the same period brought aboard groups of 67 and 71 people. In just over 72 hours, the Ocean Viking reported that in total it had rescued 572 people, including 183 children, from six boats in the central Mediterranean.

On July 4 and again on July 5, the NGO requested a Place of Safety for the people on board, but received no directions from the authorities. They had then appealed to the EU for assistance while the vessel remained at sea with the refugees covering nearly every available space on deck. 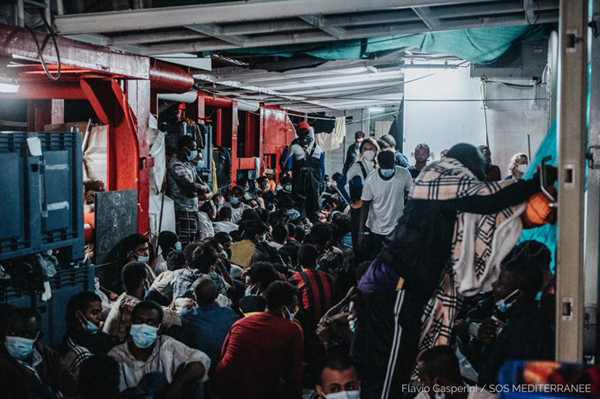 “The situation onboard the Ocean Viking is worsening by the hour,” the NGO reported on July 8. “There is no time for discussions behind closed doors. A solution must be found immediately, and a Place of Safety designated for the 572 survivors onboard.”

They warned that psychological distress and exhaustion were increasing among the individuals. On July 7, a man jumped overboard telling the crew that “his desperate gesture,” was due to the uncertainty of their situation. The NGO warned that it would run out of pre-packed 24-hour food kits as early as July 9 and that it would not be able to fulfill all survivors’ nutritional needs by Saturday. They said preparing cooked food would require too much time for that number of people.

133 survivors, including minors and people with specific medical needs have disembarked from the #OceanViking in Augusta, Sicily, so far.

Disembarkations began around mid-day in Sicily and by the end of the day, SOS Mediterranee reported that 133 individuals had been processed and brought ashore. The priority was on minors and those with urgent medical needs. The process was slowed by the requirement to test each person for COVID-19, but the NGO expects to resume the disembarkations in the morning.

The organization reports it has rescued over 31,000 people from the central Mediterranean since its operations began in 2016. They plan to continue the rescue missions until a European search and rescue program is re-established in the Mediterranean to address the problem of the migrants attempting to flee the violence in Libya and elsewhere in Africa.