Italian Frigate Intervened to Protect Crew on Bulker from Pirates

The Italian Navy provided additional details on the boarding that took place aboard a bulker in the Gulf of Guinea reporting that its frigate Luigi Rizzo intervened to stop the incident and provide security. While they did not directly engage the pirates that boarded the Arch Gabriel, they reported taking “a series of actions that dissuaded the pirates from continuing in the illicit activity.”

The crew of the 61,3000 dwt issued an alert on April 3 reporting that they were being boarded in a position approximately 300 nautical miles south of Lago, Nigeria. After alerting the authorities and calling for assistance, the crew immediately took refuge in the vessel's citadel to escape the threat of the pirates on board, the Italian Navy reports.

The frigate Luigi Rizzo is on her third deployment to the Gulf of Guinea as part of the multi-national effort to enhance security for merchant ships in the area. The vessel had departed Italy on February 24 beginning its mission which will last till June patrolling in the Gulf of Guinea. When the Arch Gabriel raised the alarm, the frigate was approximately 280 miles from the bulker and immediately change course to reach the vessel.

According to the report from the Italian Navy once the frigate reached a “useful distance,” and the first light of dawn on April 4, one of their helicopters was dispatched with members of the specialized Marina San Marco Brigade, trained in safety and boarding activities. Arriving in the area, the aircraft acquired radio contact with the crew of the bulker determining that they were safe in the citadel. The helicopter continued to patrol the area around the bulker. 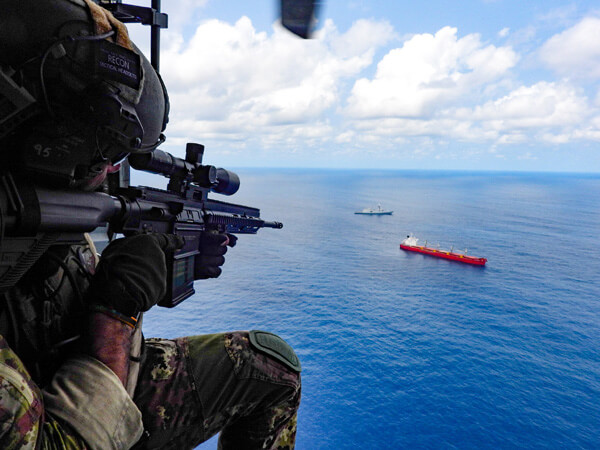 Once securing the area, the Italian Navy searched the bulker and escorted it to the anchorage (Italian Navy)

By midday, the Luigi Rizzo had also arrived in the area. They proceeded to search the area around the bulker verifying the absence of armed personnel on the open decks as well as of suspicious boats in the surrounding area.

“At around 2 pm, an operation was started which saw the insertion of a boarding team on the merchant vessel by helicopter while the frigate Luigi Rizzo guaranteed the necessary safety support,” the Italian Navy writes in their mission summary. “After about an hour, the Navy boarding team completed the search of the merchant ship, took control of it, and having verified the absence of pirates or other hostile personnel on board, freed the crew that had remained in the citadel.”

Members from the brigade remained aboard the Arch Gabriel while the crew repaired damage from the pirates. The frigate also provided an escort as the bulker sailed into an anchorage closer to shore.

The Luigi Rizzo, commissioned in 2017, is a 146-foot long frigate with a complement of approximately 200 sailors operating as part of Operation Gabinia which began in February 2020. She is providing maritime and air patrols in the Gulf of Guinea working with other international and regional forces to improve maritime security in the region. 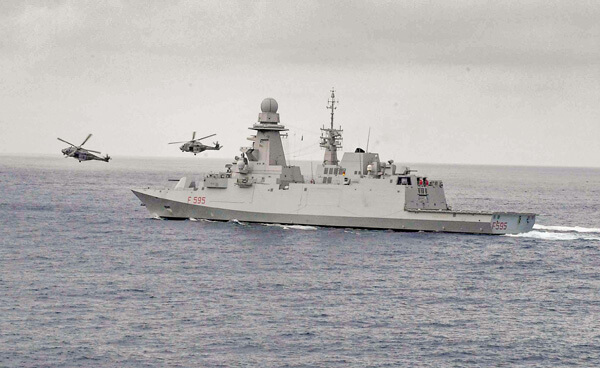