The FLAGSHIPS project is participating in the construction of the vessels, one for Lyon, France, and one for Stavanger, Norway. In Lyon, a hydrogen push-boat operated by Compagnie Fluvial de Transport (CFT) will serve as a utility vessel on one of its most demanding rivers, the Rhône.

In Stavanger, a passenger and car ferry will be operated by Norled as part of the local public transport network. The project aims to replace biodiesel with hydrogen on a ferry to be built for the Finnøy route, north east of Stavanger. The route serves several islands with short and several stops, which makes it difficult to realize the effective shore charging required for battery-powered vessels.

Both vessels will run on hydrogen produced from renewable energy, creating a basis for further local zero-emission transport deployment. Key advantages of hydrogen are lower CO2 and pollutant emissions and reduced noise.

The funds awarded to the FLAGSHIPS project have been granted from E.U.’s Research and Innovation program Horizon 2020 under the Fuel Cells and Hydrogen Joint Undertaking. Significant additional investment to build the ships is also being made by the shipowners CFT and Norled as well as the FLAGSHIPS consortium partners.

The project started on January 1, 2019 and the hydrogen ships are expected to start operation during 2021.

“Both the E.U. and the shipping industry see hydrogen as a key contributor in the work to mitigate climate change,” says Project Manager Antti Pohjoranta from the VTT Technical Research Centre in Finland. “The FLAGSHIPS project sets out to raise the readiness of hydrogen-powered waterborne transport to a new level globally.” 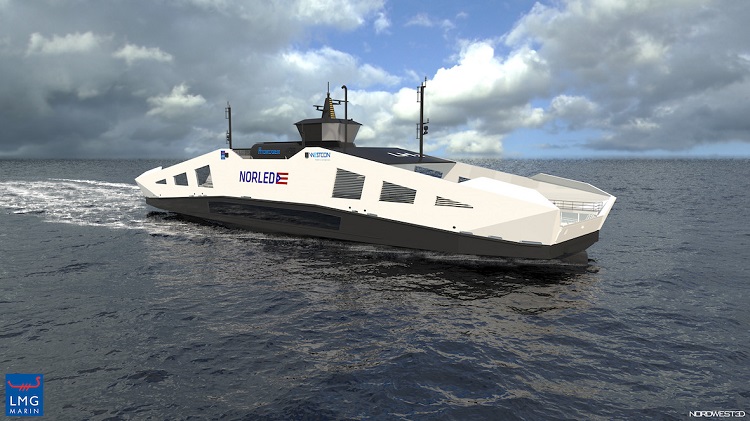 Norled has taken a leading role in the development of zero emission ferries, and the company intends to apply the hydrogen technology being developed in several other ongoing hydrogen-related projects, such as building the world’s first ship powered by liquid hydrogen for the Hjelmeland connection in Western Norway. The hydrogen ferry will be adapted to universal design with wide and threshold-free access roads without the use of a lift. In addition, the ship design has taken into account that the ferry gets clean lanes for easy logistics of vehicles, large public areas for passengers with large windows that will provide a lot of natural light in the lounge, and a well-visible hydrogen installation.

“The location of the hydrogen installation on the roof is not random. We have considered various technical solutions but have come to the conclusion that placing the hydrogen tank high up was the best alternative, both for safety and practical reasons,” Norled’s technical director Sigvald Breivik says. The vessel will be bunkered with just over three tons of liquid hydrogen every three weeks, and Norled is working with Norwegian maritime authorities and DNV GL on the handling of the liquid hydrogen.

The hydrogen ferry will connect the national road 13 between Hjelmeland - Skipavik - Nesvik in Rogaland from 2021. It will be able to carry up to 299 passengers and 80 cars and will be adapted to universal design with wide and threshold-free access roads without the use of a lift. In addition, the ship design has taken into account that the ferry gets clean lanes for easy logistics of vehicles, large public areas for passengers with large windows that will provide a lot of natural light in the lounge and a well-visible hydrogen installation.