Hong Kong is moving forward with a new generation of ferries that will be among the most environmentally friendly yet built. The nine high-speed passenger vessels are designed to transport over five million people annually on three routes between Hong Kong and outlying islands Lamma Island, Peng Chau, and Hei Ling Chau.

This new generation of vessels will be built under the Hong Kong Government Vessel Subsidy Scheme. The goal of the project is to replace existing ferries while upgrading safety and environmental standards including ensuring compliance with the safety standard High-Speed Craft Code 2000.

The nine high-speed craft will measure between approximately 115 and 130 feet. Eight of the vessels will be built entirely of carbon fiber composite while one vessel will be aluminum. The ferries will be built in Hong Kong by Cheoy Lee Shipyards, which according to Bureau Veritas, which is the classification society for the project, is one of the few yards in the world to routinely build vessels with steel, fiberglass, aluminum, and various combinations of these materials. 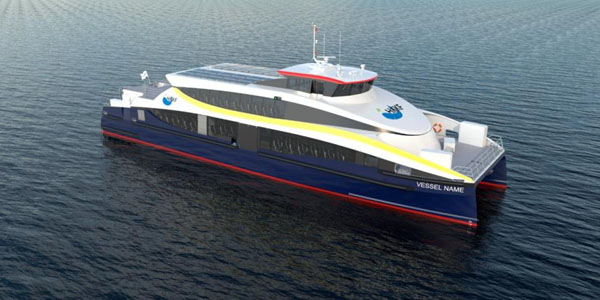 “Ferries are vital in Hong Kong,” said Alex Gregg-Smith, Senior Vice President & Chief Executive, North Asia and China for Bureau Veritas Marine & Offshore. “As the ferry market continues to grow in Hong Kong, this growth is accompanied by a need to comply with safety and environmental protection standards. Working in collaboration and supporting all stakeholders involved in this project, Bureau Veritas’ certifications will help ensure ferry safety as well as their comfort, energy efficiency, and environmental compliance.”

Energy efficiency and improved environmental performance are the top priorities for the new vessels. All nine of the ferries will be fitted with approximately 1,000 square feet of solar panels and battery systems to capture solar energy for on-board electricity consumption. The hybrid vessels will also be fitted with air-cooled Lithium-ion modular battery systems as an alternative propulsion system.

The main propulsion systems will be marine diesel engines compliant with IMO Tier III requirements. In addition, two of the nine vessels will be propelled by diesel-electric hybrid propulsion systems as part of a trial program led by Hong Kong’s Environmental Protection Department. This will enable these ferries to operate in zero-emission mode as an option during maneuvering and berthing.

The vessels are expected to be delivered between the end of 2023 and early 2025.