The situation at the grounded bulk carrier Wakashio started to deteriorate overnight on Friday, August 14, and on Saturday, August 15 the end came when the 203,000 DWT Panama flagged bulk carrier broke apart. The drama had begun three weeks earlier when the ship sailing from China to Brazil with a refueling stop in Singapore beached on the environmentally sensitive east shore of Mauritius.

The National Crisis Committee in Mauritius issued a warning Saturday morning saying that the condition of the ship was worsening and that it could break at any time. The original cracks on the starboard side increased and by around 2:00 p.m. local time the vessel began to break in the area of cargo hold number eight. At around 4:30 p.m. local time they reported that the forward section of the vessel was free of the stern section, which included the deckhouse and bridge area.

Situation just went from bad to worse yesterday in Mauritius as the hull of the WAKASHIO snapped like a twig. These photos were taken just 3 hours apart thanks to @planetlabs unique ability to rapidly revisit (in hi-res) any same spot on Earth multiple times a day. #SkySat pic.twitter.com/x0b9KDo0Cj

The salvage crew had been planning for this contingency and they had a plan in place to secure and tow the forward section. The aft section remains firmly on the reef and will likely be scrapped there. In addition, fearing further oil leakage after the vessel split, additional booms had been deployed and the coast guard and skimmers were reportedly on standby in the area.

The fear now is that the weather is going to worsen in the area. The Mauritius Meteorological Services warns that the waves will reach a maximum height of 4.5 meters in the coming days. The rough seas hold the potential to further disperse the oil that was spilled from the Wakashio and hamper the efforts to clean up the oil spill.

Around 814 metric tons of oil liquid waste, 318 metric tons of solid waste sludge and contaminated debris, and 250 cubic meters of saturated artisanal booms have been collected as at mid-day on August 15 according to the government. Additional booms and skimmers, as well as dispersants, are being used while residents have volunteered to conduct clean up on the shoreline and rescue the wildlife that has become fouled by the oil. Aid from overseas, including countries ranging from France to India, is also continuing to arrive in Mauritius. 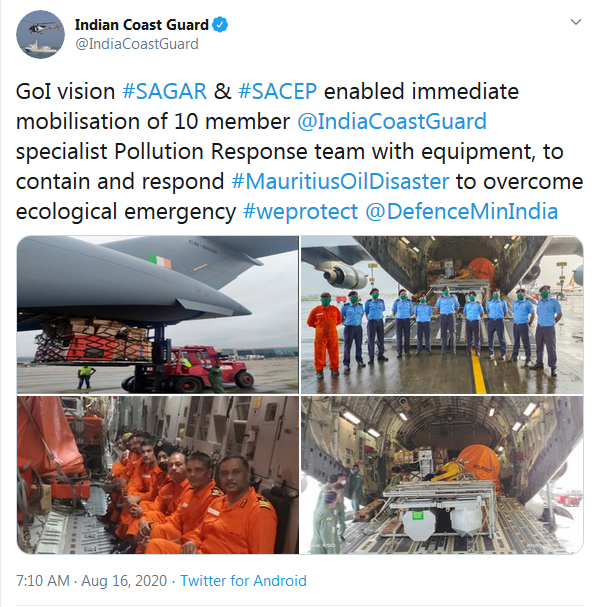 While the clean-up efforts are continuing, the crew is also interviewed by the authorities as part of the investigation process. Alligations have already emerged that the ship might have intentionally steered close to Mauritius in an attempt to receive local Wi-fi signals. The ship owner said in its statement that it has not been able to start an interview of the crew due to the government’s investigation and restrictions on its activities due to COVID-19 regulations. They also reiterated, “the owner and manager will continue to work closely with the authorities to determine the cause.”

The government is also continuing to aggressively pursue its compensation claims. They issued a statement saying, “The State of Mauritius holds the ship owner and insurer liable for all the losses and damage caused outside the ship by contamination resulting from the escape or discharge of bunker oil from the ship, the cost of preventive measures sustained and intends to claim for compensation for such losses and damages, from the ship owner and insurer.”

The Government of Mauritius also announced that it has launched an e-platform for anyone who has sustained a loss or damage or incurred expenses in the prevention and clean-up to file their claims.