After nearly a week of oil leaking for the latest section to be cut free from the Golden Ray, the unified command overseeing the operation reported that they believed they have located the source of the oil and capped it. The leak, which began on July 31 when they began to raise section six has been the most significant oil leak since salvage work began on the wreck of the car carrier in St. Simons Sound.

“Wreck removal personnel capped a venting pipe after it was raised above the waterline during a partial lifting operation of section six of the Golden Ray wreck on August 6,” the St. Simons Sound Incident Unified Command reported in an update statement today. “The submerged vent was very likely the source of the oil discharges during lifting operations which started on July 31.”

The leak had begun after the team completed the cutting for section six and they began to raise the section to prepare it to be moved to the recycling operation. The section is washed to remove sediment and other debris and it was during this operation the that crew discovered the oil. The section was lowered back down but the oily discharge continued to been seen around the vessel and escaping the protection barrier entering the sound. Oiling was observed on beaches and marshland on St. Simons Island and Jekyll Island although no official estimate was given on the amount of oil that escaped.

The command reported that the crews determined that the venting pipe had connected to two tanks that had fuel removed during fuel lightering operations in October 2019. Since securing the vent, pollution observers report minimal amounts of oil around the section.

Forty-eight hours after locating and capping the vent, the VB-10000 began to again raise the section, and this time they did not observe large oil discharges around the section. The section has again been positioned so that the crews can start the weight-shedding effort during which they remove vehicles and any moveable decks from the section as required to reduce its overall weight. The section will be lifted and stowed onto a dry-dock barge once it is safe to do so. After that, one final cut remains to separate the last two sections of the wreck. 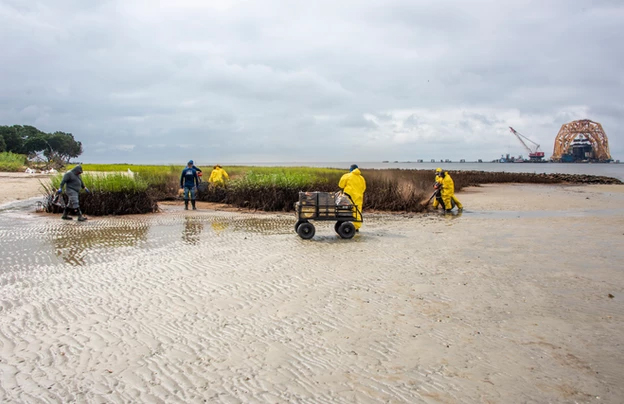 The pollution mitigation teams continue to monitor section six and the area for any potential oil discharges and approximately 30 pollution response vessels remain at the wreck site to monitor for and mitigate any oil.

After the oil was detected, additional personnel were brought in both to manage the recovery as well as a cleanup along the coastline. Wildlife experts from the Georgia Department of Natural Resources Wildlife Resources Division and natural resource advisors conducted a survey on August 4 and they reported seeing several birds that had been oiled. Wildlife rehabilitation specialists recovered 20 oiled juvenile Royal terns from Bird Island on August 7 and transported them to a rehabilitation center in South Carolina for treatment. A laughing gull was released near Jekyll Island fishing pier on Sunday after rehabilitation at a wildlife center in South Carolina.

In addition, approximately 80 personnel split into several shoreline clean-up teams are using various clean-up techniques to mitigate oiled shorelines along the southern edge of St. Simons Island and on the northside of Jekyll Island. The teams use a variety of techniques from hand tools and bags to collect oiled sand to sphagnum moss and sorbent pads to treat oiled marsh grasses.