Drug enforcement authorities in the West African country of Gambia made the largest cocaine seizure in the history of their country. Nearly three tons of cocaine with a street value estimated at more than $87 million was seized at the Gambia’s seaport in Banjul.

The drug authorities reported that they had seized one hundred and eighteen bags found to be containing cocaine in containers landed at the port. The waybill had declared the contents of the containers to each be holding 1,000 bags of salt.

The size of the shipment may be a result of the coronavirus authorities reported. The pandemic has disrupted illegal drug trafficking they reported and as a result the drug smugglers have been packing larger amounts of cocaine into fewer containers.

It was not clear where cocaine was ultimately heading, according to the Gambian authorities. Drug smugglers, they said typically use West Africa as a transshipment point for cocaine on their way from South America to Europe. They did not believe the drugs were intended for local consumption.

“This seizure is yet another confirmation that Gambia, like other West African countries, continues to be a storage and transport route for cocaine by international organized crime groups,” said Ousman Saidybah, a spokesman for the Gambian Drug Enforcement Administration. 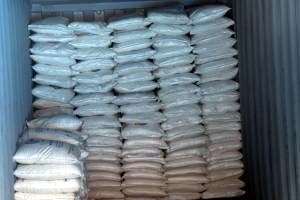 The four containers had all been consigned from Ecuador. Three had been loaded aboard a Maersk Line ship while the fourth had also originated in Guayaquil, Ecuador shipped by MSC.

“They were transshipped at the port of Algeciras in Spain before proceeding to Banjul,” the Gambian Drug Enforcement Administration (DLEAG) said in announcing the seizure. The one container departing Ecuador aboard the MSC vessel was transshipped at Antwerp, Belgium, then Las Palmas, Spain, and finally arrived at the Banjul port on December 27, 2020.

A physical search of the shipment began on January 4, 2021. The first of the four was found to be containing only salt as declared on its Bill of Lading. The search on the remaining three containers continued on January 7, 2021. It was during this inspection that the discovery of one hundred and eighteen bags containing cocaine was made.

An initial investigation showed that the containers belong to a French passport holder who is a resident in Gambia.  A manhunt is underway for this individual, while a second Gambian who was listed as the consignee for the shipment has been apprehended and is helping with the investigation.