On October 28, the United Seamen's Service recognized four vessels and their crews for providing search and rescue assistance to mariners in distress, honoring one of the highest traditions of the maritime profession. The Honored Seafarer awards went to the U.S. merchant mariners of the boxship CMA CGM Herodote, the MSC-chartered product tanker Maersk Peary, the MARAD missile telemetry ship Pacific Tracker and the MSC expeditionary fast transport USNS Yuma.

On March 21, 2022, while transiting off the coast of Tanegashima Island, Japan, the crew of the CMA CGM Herodote saw smoke from a fishing vessel about eight nautical miles away. Herodote diverted towards the fire and discovered a Japanese fishing vessel, the Yuujin Maru 51, completely engulfed in flames. The vessel was burned from the superstructure to the waterline, and it had no visible name or designating marks left. There were no signs of survivors.

The crew of the Herodote began a search pattern to look for survivors and made a call for assistance from other merchant traffic in the area. They also contacted the U.S. Coast Guard Command Center Honolulu and coordinated with the Japan Coast Guard on the search response.

After a search, Herodote located three survivors in the water. The men were rescued by a Greek-flagged tanker which had joined the effort (the Woodside Rogers).

Herodote continued her search for a total of seven hours until she was relieved by the Japan Coast Guard. Unfortunately, the three fishermen Herodote located were the only survivors out of a crew of eight aboard the Yuujin Maru 51.

For their actions, Capt. Nick Simmons of U.S. Coast Guard Sector Guam presented Capt. Donald Moore and the crew of the Herodote a Coast Guard Certificate of Merit.

Maersk Peary: An urgent migrant rescue in the Aegean

On December 22, 2021, the U.S.-flagged tanker Maersk Peary was crossing the Aegean north of Crete, headed for the Suez Canal. She had just loaded fuel for delivery to McMurdo Station in Antarctica, some 9,000 nm and two oceans away. That evening, Rescue Center Piraeus requested assistance in finding a capsized migrant vessel with about 80 people on board.

The Maersk Peary was less than 14 miles from the casualty, and she changed course to start a search grid established by the Greek Coast Guard. The ship’s master, Everett M. Hatton, maneuvered slowly into the zone while his crew mobilized a launch crew with the rescue boat. An hour into the search, with searchlights scanning the waters, Captain Hatton spotted a white object in the water.

Maersk Peary launched a rescue boat loaded with blankets, and the boatcrew proceeded toward the object. It turned out to be a boat fender, and the rescue boat team found a survivor clinging to it. The chief mate tried to communicate with the man, but he was shivering and unable to speak. The crew pulled him onto the rescue boat and met up with a nearby Greek Coast Guard vessel, the OSP707, to transfer him over for further care.

Maersk Peary continued her grid search for another four hours before being relieved by Greek authorities. Including Maersk Peary's contribution, 62 out of an estimated 80 migrants aboard the craft were rescued, and 16 bodies were recovered from the water.

Pacific Tracker: Injured yachtsman rescued off the coast of California

On July 10, the missile tracking ship SS Pacific Tracker was sailing about 500 nm off the coast of California when she received a call from Coast Guard Rescue Coordination Center Alameda. A small sailing yacht was in distress at a location nearby and needed assistance. During the course of a yacht race, the vessel's sole occupant had sustained an uncontrollable nose bleed, and his position was too far offshore for a helicopter medevac.

Pacific Tracker began a search for the 20-foot sailing vessel, which was located about 100 miles away. Hours later, at about 1845, the crew spotted the small target and launched their work boat. They rescued the sailor and brought him safely back aboard the ship. 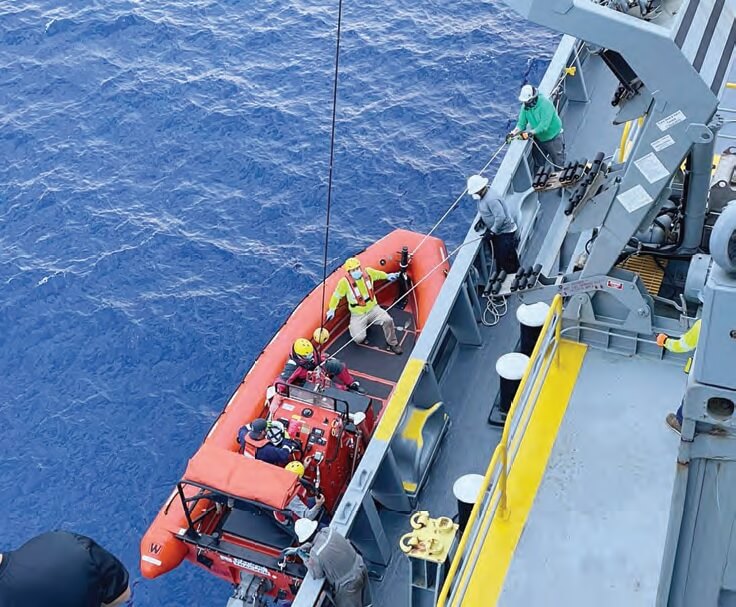 Pacific Tracker steamed back towards shore, staying in touch with medical advisory services to monitor the patient's condition, and then transferred him to a U.S. Coast Guard helicopter aircrew for a medevac on July 12.

On September 1, 2022, USNS Yuma was transiting in the Eastern Mediterranean on routine operations when her crew received a call for assistance. A distressed vessel carrying more than 90 migrants had been in a collision and was sinking.

Migrants with families were taken aboard the Libeccio. One of the survivors included a four-month-old girl who had an ashen appearance. USNS Yuma dispatched its medical officer over to Libeccio to help, then made another shuttle run with medical supplies. The officer was able to stabilize the baby before returning to USNS Yuma.

All the migrants were rescued from the water and the 35 aboard USNS Yuma were transferred to a Maltese patrol boat. Libeccio, with the other 58 survivors, raced toward Italy to get in range for a medevac flight for the critically ill child. Her part completed, USNS Yuma resumed her patrol.