Japan’s Mitsui O.S.K. Lines (MOL) has completed construction of its first’s rigid wind sail which will be installed on an under construction bulk carrier due to enter service later this year. Completion of the first construction marks an important milestone in what began as an academic research project 11 years ago and which MOL now plans to test toward incorporating it into large vessel designs.

Known as the Wind Challenger Project, the concept is to add a hard sail to the large vessels to add supplemental wind energy to the propulsion. The hard sail, which is made of composite material, stands nearly 170 feet in height when fully raised at sea, but can be lowered to permit the vessel to pass under overhead obstacles or while docked in port for loading and unloading. According to MOL, the additional propulsion power from wind can reduce a vessel's greenhouse gas emissions by an estimated five to eight percent compared to conventional ships of the same class.

The first assembly was completed working with the Oshima shipyard that is also building the bulker that it will be fitted to during the next phase of the project. Currently, the sail is undergoing shoreside tests. 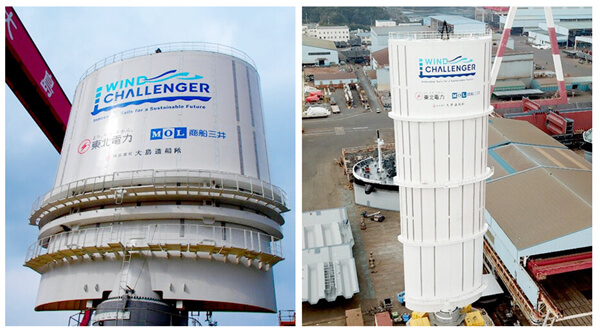 The bulker on which the sail will be installed is a 99,000 dwt vessel that will have a length of approximately 770 feet. In December 2020, MOL announced the construction of this first vessel fitted with the Wind Challenger as part of a coal transport deal reached with Tohoku Electric Power Co.

The effort to develop the wind propulsion technology began in 2009 with the Wind Challenger Plan, an industry-academia joint research project led by The University of Tokyo. The project was selected by Japan's Ministry of Land, Infrastructure, Transport and Tourism and since 2013 the team has been receiving a subsidy to support the research into the next-generation marine technology. In January 2018, MOL and Oshima Shipbuilding took charge of the design and in October 2019, received an Approval in Principle (AIP) for the hard sail system. Since then, the companies have been developing a detailed design and implementation plan for the sail system.

In addition to the first bulker being built to operate for Tohoku Electric, MOL has reported that it is also working with its long-term customer Enviva, a global renewable energy company specializing in sustainable wood bioenergy, to develop and deploy an environmentally friendly bulk carrier. MOL has said that it is also working together with Indian company Tata Steel to develop an environment-friendly bulk carrier to transport raw materials to the steel mills. Both of these vessel designs also incorporate the Wind Challenger.

MOL also announced late in 2021 that it was studying with mining giant Vale International the use of wind propulsion systems employing rotor sails on large bulk carriers. Where they have been focusing on vessels under 100,000 dwt for the rigid sail, the study with Vale is exploring the use of rotor sails manufactured by UK-based Anemoi Marine Technologies on a 200,000-ton class in-service bulk carrier. These ultra-large vessels mainly transport iron ore for steel production.