Built in 2014 at Hyundai Heavy Industries in Ulsan, South Korea, the vessel was originally named Sajir for the United Arab Shipping Company and acquired by Hapag-Lloyd as one of 17 vessels in the merger acquisition of UASC. With a length of 1,207 feet, the 149,360 dwt boxship was designed for the potential conversion to LNG power. Before the conversion, the vessel’s capacity was rated at 14,993 TEU.

The process of retrofitting the Sajir for LNG propulsion began on September 2, 2020, at the HuaRun DaDong Dockyard in Shanghai. During the first phase, the ship’s hold was prepared for the installation of the LNG tank. DNV approved a 6,700 cubic meter gas storage system that occupies an area equivalent to 350 containers, including the pipework between storage and engine. A floating crane lowered the 1,300-ton LNG tank into the hold while the main engine and the auxiliary diesel engines were converted to dual-fuel operation for LNG and low-sulfur fuel oil.

“The fact that a retrofitting of this scale had never been done before meant that we faced numerous challenges, from the planning to the implementation,” said Richard von Berlepsch, Managing Director Fleet Management at Hapag-Lloyd. “We have broken new ground with the conversion, and we will now be testing it very precisely in real-world operation.”

Hapag-Lloyd recently took delivery of the vessel from the shipyard and to mark the conversion process the vessel was renamed Brussels Express. According to Hapag, the name was chosen in recognition of the European Green Deal. In addition, the phrase “Shipping for a cleaner future!” was painted on the breakwater on the forecastle, and “Powered by LNG,” was painted on the hull. 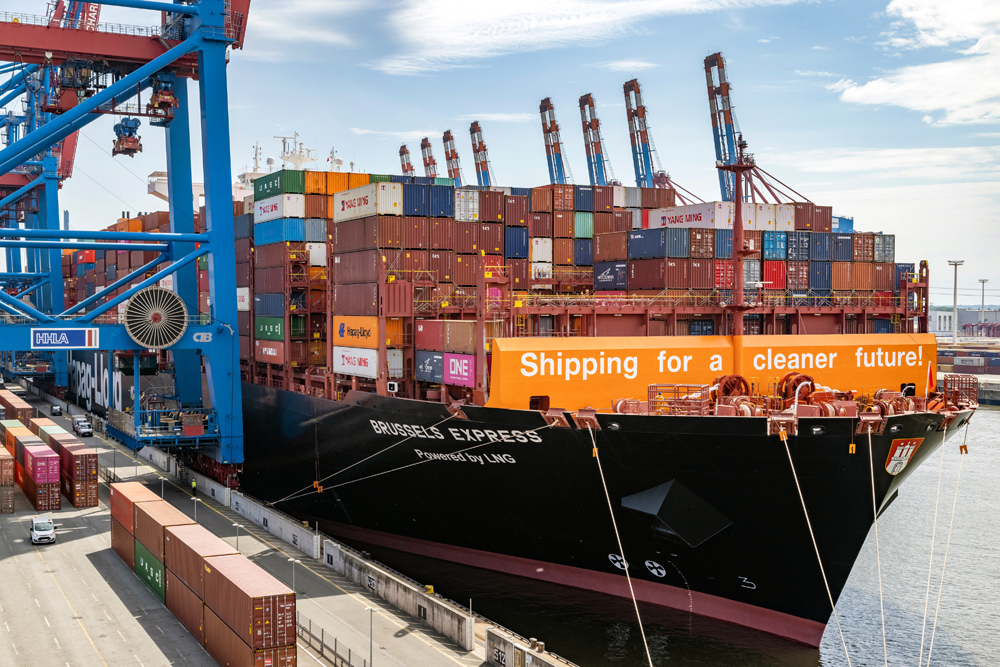 Hapag noted that the vessel which will be operating between Asia and Northern Europe is not yet operating exclusively with LNG. The final guarantee work will be performed at the end of the current voyage and they anticipate the first complete LNG bunkering will then take place in Singapore on the next round voyage. In the future, the Brussels Express will bunker twice per round voyage in Singapore and Rotterdam.

“Fossil LNG is currently the most promising fuel on the path towards zero emissions,” said von Berlepsch on the arrival of the vessel in Hamburg. “The medium-term goal is to have CO2-neutral shipping operations using synthetic natural gas (SNG).”

At this time, the conversion is viewed as a one-off trial to understand the process and the results for the vessel in operation. Speaking last fall, Hapag chief executive Rolf Habben Jansen pointed out the complexity of the conversion. He said that the cost, which was estimated at $35 million for the Sajir conversion, was too high, making it impossible to recoup the investment within the lifetime of the ship. Jansen estimated that they would have to find ways to bring the cost to a $25 million investment to proceed with additional conversions.

Speaking recently, Jansen said the company remains committed to decarbonization on its ships’ operations but that the long-term determination on fuel remains to be made. He believes it will be a few years before the new technologies emerge and in the meantime, Hapag has been testing a variety of fuels including biofuel. Hapag is currently focusing on dual-fuel machinery to provide its ships the ability to adapt to future gas technologies.