The naming and launch of the first battery-powered tanker were celebrated in Japan on December 22. The ship is an electric propulsion tanker powered by a large-capacity lithium-ion battery and will operate as a bunker vessel in Tokyo Bay for the Asahi Tanker Company.

The design for the vessels was developed by e5 Lab Company as part of its effort to develop zero-emission ships and through the use of technology improve the working environment aboard the vessel. The tanker will be powered by lithium-ion batteries with a capacity of 3,480kWh. Kawasaki Heavy Industries manufactured the battery system that will power two 300kw azimuth thrusters and two 68kw side thrusters. The tanker will have an operating speed of about 10 knots and a range of approximately 100 miles. It will require about 10 hours to fully recharge the batteries.

Asahi Tanker announced in October 2020 its plans to build two battery-powered electric tankers as demonstrations of the e5 tanker concept. Each vessel will measure approximately 203 feet in length and have a 34-foot beam. With a gross tonnage of 499 tons, each vessel will have a capacity of 1,280 m3 supplying heavy oil to ocean going vessels in Tokyo Bay. ClassNK is the classification society for the vessels.

By electrifying the internal combustion engine, Asahi Tanker says it will not only eliminate exhaust emissions but will also improve the working environment aboard the ship. It will eliminate vibration and noise as well as reduce the maintenance requirements. Adoption of various automated equipment and digital tools including the Internet of Things (IoT) will also reduce the crews’ onboard workload and increase the ship’s operating efficiency.

The battery storage system also has the advantage that it can be used to supply emergency power to a land-based facility in the event of a natural disaster. 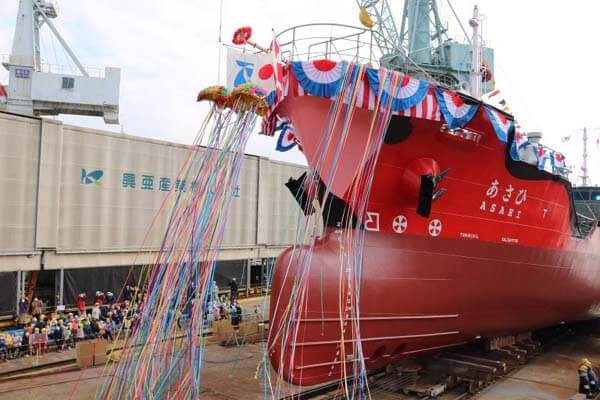