The first direct container service connecting China and Scotland berthed at Greenock, Scotland on Saturday morning launching a new service that is an example of the niche carriers emerging in response to the challenges in the global supply chain. Set up as a partnership between Allseas, KC Shipping, and Peel Ports, the new China Xpress promises three times per month sailings with dedicated 1,600 TEU vessels.

Allseas begin building its new shipping line in 2021 reporting that it was the first new British shipping company launched to transport international cargo in possibly 40 years. The service began with a route to Bangladesh and is now being expanded with the direct China service which they expect will prove very popular with shippers both in China and Scotland.

The companies are promoting multiple advantages of their new service including quicker turnaround times and more predictability. The vessels are loading in Ningbo-Zhoushan and Dongguan (Shenzhen) China and Liverpool and Greenock in the UK. The company is promising a 10-day port rotation and a shorter 33-day journey by eliminating the congested ports of Northern Europe. The route will be maintained by six ships.

Fittingly, the Allseas Pioneer, a 19-year-old general cargo ship (35,000 dwt) outfitted to carry the containers, made the first arrival in Greenock on August 27 for a 17-hour call. She was carrying textiles, furniture, packing materials, bathroom fixtures, fitness equipment, beauty supplies, toys, Christmas decorations, and footwear all manufactured in China. For the return trip, she loaded with beer, gin, shortbread, water, oil and gas machinery, confectionaries, and over one million bottles of Scottish whiskey. 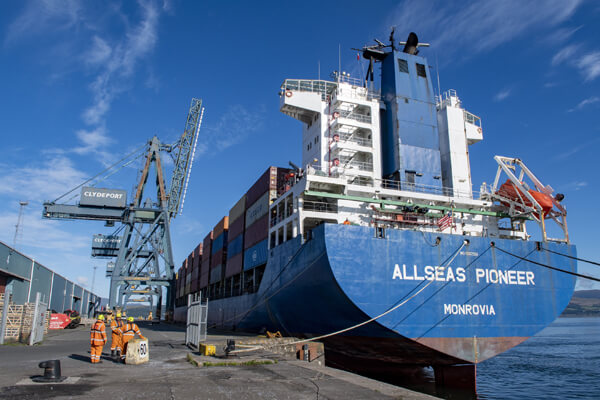 Allseas Pioneer was the first on the direct route docking in Greenock, Scotland (Peel Ports)

“We knew China Xpress was a service needed by many sectors, but still, we’ve been amazed at the level of immediate interest. It's been a phenomenal success for KC Group Shipping, but this is just the first of many journeys,” said David Milne, Managing Director of KC Group Shipping. "Our direct trading link to China cuts through frustrating transshipment delays which is a massive boost for Scottish businesses, and can only help consumers in these difficult times.”

The addition of Scotland is a further expansion of the route and plans by Allseas to provide a niche solution to shippers. The route can not provide the volumes that large carriers are seeking but the company is hopeful that Scottish manufacturers will support the service. In addition to cutting weeks of the traditional export routes, KC Shipping notes that for Scottish importers who use China as their primary source of stock and raw materials, the direct from suppliers' home ports to Greenock will offer a much more predictable timeframe than shipments currently coming via Rotterdam and other European ports.

“We believe this partnership will prove to be a hugely positive development for businesses and customers, as well as boosting the wider supply chain, and we look forward to continuing to work with our partners on this service in the coming months,” said Jim McSporran, Clydeport Director at Peel Ports. “It’s great to finally welcome this vital service to Greenock Ocean Terminal.”

This service is just one example of the emergence of niche routes and new companies entering the shipping business. A German company Carrier 53’ Shipping announced the launch of new services between China and the U.S. West Coast including service to the less congested port of Portland, Oregon. German retailer Lidl also recently completed the first sailing of its dedicated ships between China and Europe.