Fires at sea and specifically container fires remain one of the greater fears for vessel operators. The industry has made significant progress after a spate of high-profile cases a few years ago, but still the dangers persist from incidents such as misdeclared cargos and hazardous goods. Maersk, which like all the major carriers has suffered incidents, is making a significant investment in a simple-to-use tool that will add to the crew’s ability to fight fires inside containers before they get out of hand and cause significant losses.

Known as HydroPen, it is a telescoping device that makes it possible to directly extinguish container fires at heights either on deck or below deck on board cargo vessels by getting the fire fighting inside the container. Conventional fire fighting methods involve spraying water on the outside of a burning container especially when it is high up in the stack. According to the company, its device is intuitive to use and makes it possible for the fire crew to penetrate the container and extinguish the fire either using water, foam, or CO2.

“From having been involved in the early development phases to fully implementing the HydroPen system, A.P. Moller – Maersk has once again shown its uncompromising commitment to go beyond industry standards, to protect both its crews and its client’s cargo and assets,” said Anders Nørgaard Lauridsen, Senior Country Director, Baltic Sea at Viking Life-Saving Equipment.

Viking is reporting that Maersk has opted for full-scale implementation of the HydroPen system. Development of the system began in 2016 as “a garage project,” headed by two entrepreneurs that developed the company starting in 2017. Viking acquired HydroPen in 2021. While the system is already in use around the industry, the company noted that this contract represents the single largest HydroPen order for VIKING, and will see systems delivered for the entire fleet of A.P. Moller – Maersk-owned vessels. 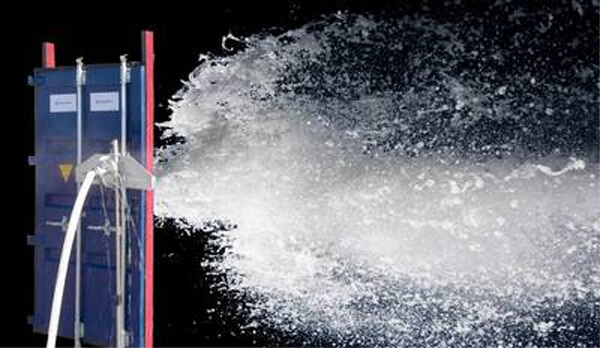 HydroPen penetrates the container spraying inside to fight the fire (Viking)

“Once crews familiarize themselves with HydroPen, there is no going back - and since its introduction, the system has already proven itself in live firefighting situations,” said Lasse Boesen, Senior Product Manager. He also noted last year when Viking acquired the company that they had also received interest from land-based fire-fighting operators.

Viking explains that the system works by attaching to a ship’s hose and is raised on a telescopic arm by a single crew member. The water pressure alone powers its “drill and spray” nozzle to penetrate a container door before switching to spray mode to extinguish a fire with water, foam, or CO2. Once deployed it is simple to use and acts fully automatically. The firefighter can deploy the system within their reach or it can be hoisted to the burning container.

In addition to the deployment of the system by Maersk, last year Viking reported that CMA CGM had purchased 85 of the devices for use on its vessels. CMA CGM had conducted initial trials in Marseille. A second trial took place on the container ship CMA CGM T Roosevelt in Los Angeles. Pacific International Lines (PIL) also placed a fleet-wide order for the device.