Fincantieri and MSC celebrated the float out of the cruise company’s first luxury cruise ship for its new brand Explora Journeys. The launch of Explora I, which took place today, May 30, at the shipyard in Monfalcone, Italy, is part of a more than $2 billion investment by MSC to launch its second cruise brand with at least four new cruise ships. Separate from the cruise company’s larger contemporary brand MSC Cruises, the new company marks the company’s entry into the ultra-luxury cruise segment.

MSC placed the order in 2018 with Fincantieri calling for the construction of four cruise ships to launch the new brand. Each of the ships, which will measure 813 feet in length, will be 63,900 GT. Targeting the high-end luxury segment of the industry, the ships will each accommodate less than 1,000 passengers with a crew of 640.

The new brand is unique as the ships will introduce the concept of ocean residences to a cruise ship that predominately has suites for cruise passengers. According to Explora, each ship will have a total of 461 oceanfront suites, penthouses, and residences, which will include 23 residences as well as 82 cabins dedicated to multi-generational family travel. The majority of the cabins are penthouses and suites and all are outside cabins with a private veranda.

The cruise line is promoting that it will have one of the highest passenger space ratios in the industry and offer a broad range of amenities, including nine restaurants, 10 indoor and outdoor bars and lounges, four swimming?pools, extensive outdoor decks with private cabanas, wellness facilities and refined?entertainment. There will be a large spa as well as a marina located on the stern of the ships.

Fincantieri designed the ships for MSC with construction beginning with the first steel cut in June 2021. The first ship is due for delivery in May 2023, while the keel for the second ship was laid earlier this month at the Fincantieri shipyard in Castellammare di Stabia, Italy. The second ship is due for delivery in the summer of 2024 to be followed by two more ships in 2025 and 2026. 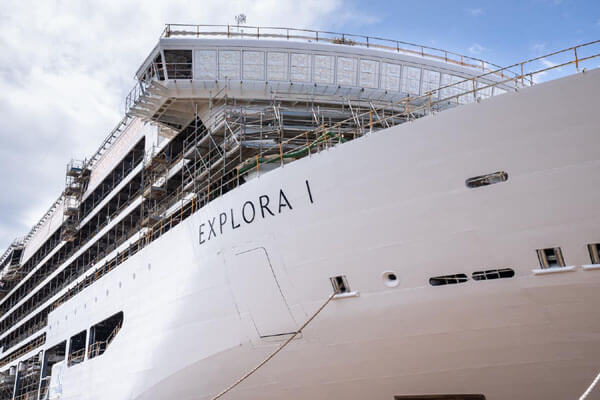 Part of the brand identity is also a high-level focus on the environment and sustainability. While the first two cruise ships are being built to operate on conventional fuel, it is rumored that MSC is in negotiations with Fincantieri to alter the future plans for the fleet. The Italian news outlet Il Secolo XIX reported last week that the third and fourth ships are being redesigned to incorporate an LNG-fueled power plant. According to the newspaper, the vessels will be longer to accommodate the LNG tanks.

Il Secolo XIX also reported that MSC and Fincantieri are discussing expanding the order to include two additional cruise ships. The newspaper said these new ships would be built with one of the first hydrogen power plants in the cruise industry. Speculation was that the negotiations for the changes to the order would be completed as early as today as part of the festivities for the launch of the first ship.