Italian shipbuilder Fincantieri completed the delivery of the largest cruise ship yet built in Italy to MSC Cruises. The 170,400 gross ton MSC Seascape is the last of four cruise ships ordered by MSC Cruises from Fincantieri with the first of the ships introduced five years ago.

These cruise ships use design concepts developed by Fincantieri that reposition the vessel’s main weight, primarily the engines, forward into a midship position. The balanced repositioning of the weight provides greater structural and hydrodynamic efficiency. The use of a narrower superstructure creates both a large outdoor promenade as well as permitting the ship to increase the cabin count by as much as 10 percent.

MSC says that the unique design with its curved aft superstructure and glass-enclosed elevators mirrors the look of Miami’s upscale buildings and provides the ships with a unique appearance. After completing the first two ships, MSC Seaside in 2017 and MSC Seaview in 2018, the design was enlarged to create the larger Seaside Evo class which became the largest cruise ships built in Italy. The MSC Seascape delivered today as well as her sister ship MSC Seashore delivered last year are 1,112 feet long. The ships have a maximum passenger capacity of 5,632 people and a crew of 1,648.

"MSC Seascape is the second ship to come into service this year bringing our modern fleet to 21 ships,” said Gianni Onorato, Chief Executive Officer of MSC Cruises during the handover ceremony in Monfalcone, Italy. “We are proud to welcome her to our fleet as she is the second Seaside EVO ship and completes the innovative Seaside class.”

Built at a cost of more than €1 billion, the new cruise ship is part of a more than €7 billion investment by MSC at Fincantieri. The shipyard in addition to the four Seaside cruise ships is also contracted to build six smaller, luxury cruise ships for MSC’s new Explora Journeys brand due to launch in 2023. 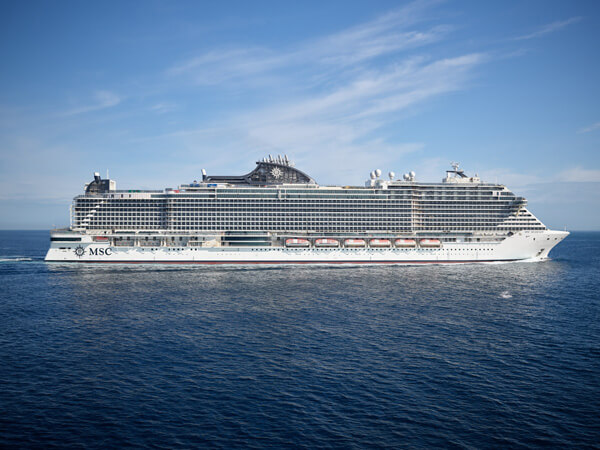 MSC is also building large cruise ships with France’s Chantiers de l’Atlantique. They recently took delivery of one of the world’s largest cruise ships and the largest LNG-fueled cruise ship, the MSC World Europa, from the French shipbuilder.

The new ships are part of a continuing effort by MSC to expand its cruise operations. The company highlighted that in October 2022 it received over 400,000 new bookings, the highest monthly total in the history of the company. “This reflects the continued strong investments made in our fleet, which is one of the most modern in the industry with five new state-of-the-art vessels delivered only in the last three years alone,” said Onorato. The cruise line is scheduled to take delivery on two more cruise ships built in France due in mid-2023 and 2025.

Among the unique features aboard the new MSC Seascape is nearly 140,000 square feet of outdoor deck space including the 1,772-foot long promenade. The ship features 11 dining venues and 19 bars and lounges as well as a large dedicated kids’ space and the largest suite complex on any MSC cruise ship. Among the amusements is a new ride that MSC describes as a combination of a rollercoaster with a personalized DJ music experience.

The MSC Seascape will be christened in New York City at the beginning of December as part of MSC Cruises' efforts to expand its presence in the United States. The ship will then begin her inaugural season cruises from Miami to the Caribbean. She is scheduled to sail year-round from Miami into 2025.

While the MSC Seascape now holds the title of the largest cruise ship built in Italy, she will be eclipsed in a little over a year by an even larger cruise ship. Fincantieri has begun construction on the new Sun Princess for Carnival Corporation’s Princess Cruises. Due to enter service in February 2024, this new ship will be 1,133 feet long and 175,500 gross tons. She is also the first LNG-fueled cruise ship that Fincantieri is building as part of a two ship order for Princess.