The EU's operation to intercept military shipments to Libya has nabbed another cargo of armored vehicles, its second in a matter of months.

On October 11, an EU asset operating under EUNAVFOR's Operation Irini spotted a Dutch-flagged cargo ship, the the 5,000 dwt Meerdijk, which was allegedly on its way to Libya. Operation Irini's officers suspected that Meerdijk may have been carrying banned weapons for one of Libya's warring parties. If the freighter was indeed carrying contraband, she was doing little to hide it. Her AIS was turned on and showing a position 30 nm off the coast. The consignment was not even concealed: Meerdijk was carrying 15 armored trucks on deck, in broad daylight, without a tarpaulin.

Operation Irini asked The Netherlands for flag state permission to board the Meerdijk in international waters, and with permission swiftly received, its team conducted an underway boarding. The ship was found to be transporting "vehicles modified for military use" to Libya, a suspected breach of a UN arms embargo. 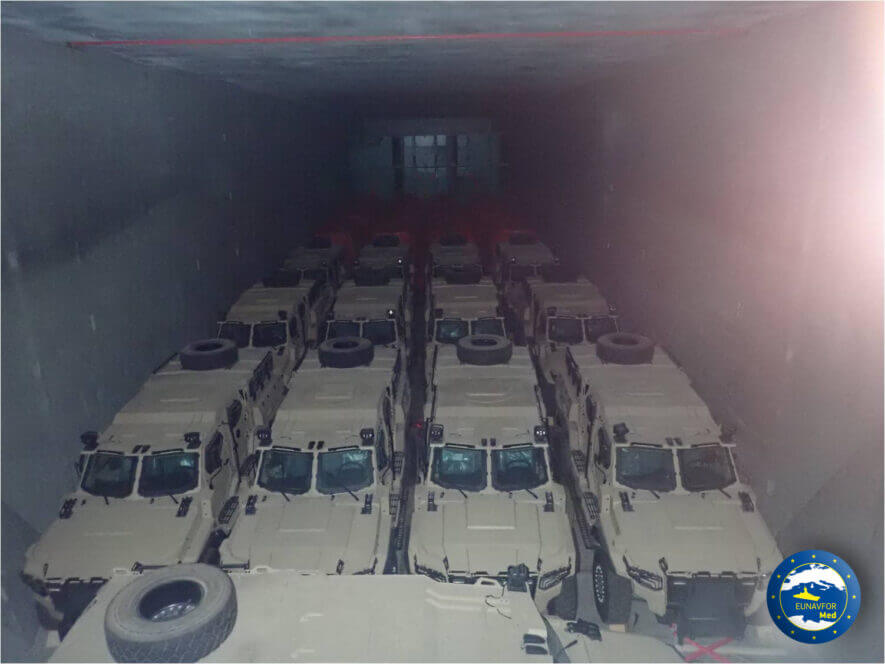 The cargo was seized and Meerdijk was ordered to divert to the port of Marseilles for a more thorough inspection. The trucks on the weather deck turned out to be complemented by at least another 13 in the hold. The cargo was examined by the UN Panel of Experts on Libya, then lifted off the ship and stowed on shore.

The vehicle model has been identified as a UAE-built TAG BATT UMG, a lightly armored infantry mobility vehicle offering protection from small arms fire. The truck is based on a Ford chassis to ensure widespread parts availability. TAG's products have previously been observed in the possession of warlord Khalifa Haftar's Libyan National Army, which has UAE backing, according to open-source intelligence compiled by the Oryx group.

The Meerdijk's operators told Dutch news outlet RTL that the crew and the shipowners have not been fined or prosecuted, and that they held all proper documentation for the shipment. The vessel has since returned to her normal commercial operations.

It was the second seizure Operation Irini has carried out since this summer. In July, the Italian frigate ITS Grecale intercepted the ro/ro ship Victory Roro and seized dozens of military vehicles bound for Libya.

The arms embargo on Libya was imposed in 2011, the year of the fall of longtime dictator Muammar Gaddafi and the start of a cycle of violence and civil war. Operation Irini has carried out inspections at sea in support of the embargo since 2020. So far, all flag states except one (Turkey) have complied with boarding requests, and the operation's personnel have inspected a total of 25 vessels.