Four days after up to 900 desperate people drowned trying to reach Europe from Libya, EU leaders agreed on Thursday to triple its naval search mission in the Mediterranean, restoring its funding to last year's level.

Critics called it a face-saving operation that did not go far enough to emulate an Italian rescue mission abandoned six months ago for want of EU support. And divisions remained over longer-term proposals, ranging from dealing with people smugglers and African migrant camps to how to redistribute asylum-seekers around 28 nations where anti-immigrant parties are on the rise. 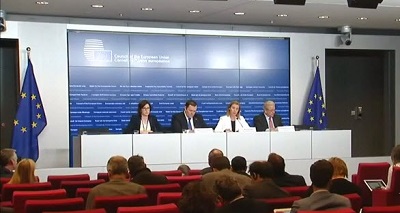 But Italian Prime Minister Matteo Renzi, who had called for the emergency summit in Brussels after the deadly sinking of a crowded vessel on Sunday pierced many Europeans' indifference to the fate of unwelcome migrants, called it "a big step forward for Europe".

Countries, including Britain which will send the Royal Navy's helicopter-carrying flagship, pledged aircraft and boats to Operation Triton, an EU frontier operation off Italy. Funding for a similar operation off Greece was also to be increased.

Officials said the difference could be felt within days. Italy warned that, after nearly 2,000 deaths so far this year out of nearly 40,000 people making the crossing, a summer season was starting that could push total arrivals on its shores for 2015 to 200,000, an increase of 30,000 over last year.

"We face a difficult summer," said the summit chairman, European Council President Donald Tusk. He took pains to warn that there would be no quick fix for problems that saw more than 600,000 people seek asylum in the European Union last year.

Tripling annual funding to 120 million euros ($130 million) puts Triton in line with Italy's Mare Nostrum mission. That rescued 100,000 people last year but was criticized by Germany, Britain and others for attracting more people to put to sea in leaky craft supplied by profiteering gangs of traffickers.

In the face of public outrage, governments have muted those concerns about a "pull factor" and launched what one EU official said was a Mare Nostrum Mark II, ready to roam the high seas - although human rights groups worry its border defense mandate may mean ships stay too far from the trouble spots off Libya.

Among 17 proposals in a summit communique, leaders agreed to "undertake systematic efforts to identify, capture and destroy vessels before they are used by traffickers". It is unclear how that may be achieved and several leaders said they would need a U.N. mandate in the absence of a viable Libyan government. 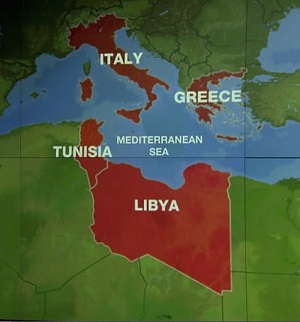 The group that controls Libya's coastal capital Tripoli, which is not recognized internationally, said it would "confront" any such EU attacks. And veto-wielding Russia, at daggers drawn with the EU over Ukraine, could block a mandate.

Medical charity Medecins Sans Frontieres criticized the focus by leaders on trying to quell Libya people traffickers as they once did Somali pirates: "We are amazed to see that the huge means and resources allocated to declaring war on smugglers are not equally invested in saving lives," said Aurelie Ponthieu, an MSF humanitarian adviser.

"Focusing on keeping people out by cutting their only existing routes is only going to push people fleeing for their lives to find other routes, potentially even more dangerous."

Leaders said they would aim for long-term solutions, such as easing poverty and war in the Middle East and Africa, giving people in need a chance to ask for asylum before reaching Europe and opening possible legal routes to migration for some.

German Chancellor Angela Merkel, whose country along with Sweden takes in a large proportion of asylum-seekers, called for a change in the EU's system of managing asylum claims to better distribute the pressures across the bloc.

But few governments are willing to take a greater share and agreements on Thursday were limited. They will consider a voluntary scheme to ease the burden of arrivals on "frontline" states in the south - notably Italy, Greece and Malta. And they plan a pilot project to bring in refugees from abroad and resettle them around the continent, seeking a broad distribution. 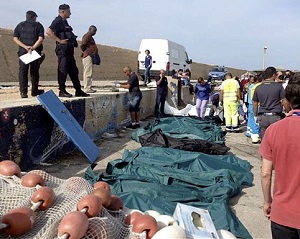 An initial draft of the statement had suggested 5,000 people be brought in under this pilot. But there was no figure in the final agreement, reflecting deep hesitation across the Union.

Underlining global attention, the United Nations had criticized the European response so far and urged it to do more: "The European Union response needs to go beyond the present minimalist approach ... which focuses primarily on stemming the arrival of migrants and refugees on its shores."

EU officials and diplomats said differences among the states meant the legal mandate of Operation Triton would not be changed to make it explicitly intended to search for migrants and rescue them close to the Libyan coast. However, vessel commanders would have freedom to monitor where they wished to bar illegal entry to EU waters - and must under maritime law rescue anyone in trouble.

British Prime Minister David Cameron, seeking to fend off anti-immigration populists as he faces an election just two weeks away, pledged a warship, helicopters and support craft. But he stressed that people picked up would not automatically be given refuge in Britain and would mostly be delivered to Italian authorities to deal with.

Even as the leaders gathered, the Italian coast guard picked up 84 men, all apparently sub-Saharan Africans, from a sinking rubber boat 35 miles off Libya after receiving a distress call.

There were just 28 survivors from Sunday's disaster, apparently the worst among migrants fleeing by sea to Europe from north Africa.

An interfaith funeral was held in Malta for 24 victims, the only ones whose bodies have been recovered so far from a ship in which many are believed to have been locked in below deck.

Imam Mohammed El Sadi said what had happened should raise awareness of the migrants' plight, while Bishop Mario Grech called for action motivated by love, rather than just the law. 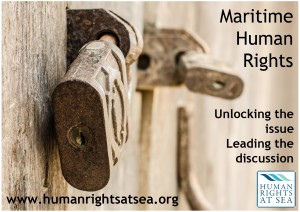 HRAS: An Arbitrary Threshold has been crossed

Quite rightly there is international uproar and articulated outrage that not enough is being done by EU States to save lives at sea and protect the rights of those migrants who seek to leave behind desperate circumstances to seek a better life elsewhere, says David Hammond, founder of Human Rights at Sea (HRAS).

“Migrant movement across the Mediterranean and the consequential migrants losses at sea, sadly, is not a new issue,” he says. “It is only now that when what appears to be an arbitrary threshold for loss of life is crossed principally determined by civil society’s outrage from increased media reporting combined with advocacy and lobbying by NGOs and southern EU State concerns at the ending of the Mare Nostrum operation due to a lack of collective EU funding, that attention has finally been focused on the human rights abuses occurring at sea.”

Ever since what could be argued as the seminal incident of the Lampedusa tragedy in October 2013, where 950 migrants drowned, some left to die in locked holds aboard a 70 foot fishing vessel which sank off the Italian coast and which saw rescuers able to rescue only 28 persons; the increasing concern for loss of life in the Mediterranean only then started to gain traction.

But this was not always the case, says Hammond. NGOs and southern EU States calls for assistance were previously ignored by the wider European community. It appeared that previously, not enough people had died in order to warrant further intervention. 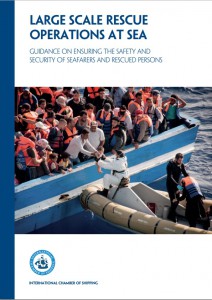 From a shipping industry perspective, the IMO has now reacted positively to the migrant issue, but HRAS would suggest that only once members had started raising concerns that its consequences were negatively affecting the industry i.e. the international law requirement for rescue at sea under the likes of the UN Convention on the Law of the Sea (UNCLOS) Article 98 by vessels not designed to carry migrants, with requirements for re-routing and delays in the carriage of goods, limited crew numbers causing fatigue, health and safety issues, and limited if no training to deal with such humanitarian matters by crews. In short, the shipping industry is currently at the front line of efforts to rescue victims at sea, but are not scaled to be so.

As HRAS was informed last year by a member of the maritime industry, “no issue would become an issue unless it affected members” which ironically 6 months later it did. It is also notable that while the duty to render assistance at sea that has been enshrined in international law since 1982 in UNCLOS, it was on 10 December 2014 as part of Human Rights Day 2014 that the International Chamber of Shipping’s ‘Large Scale Rescue Operations at Sea’ Guidance leaflet was produced in response to what was described by ICS as “the immediate impetus for this advice…”.

As stated, the leaflet is intended for masters, ship owners, government authorities, insurance companies and other interested parties involved in rescue-at-sea situations. It provides guidance on relevant legal provisions, on practical procedures to ensure the prompt disembarkation of rescued persons, and on measures to meet their specific needs, particularly in the case of refugees and asylum-seekers.

It does not, however, once mention any aspect for dealing with the matter of individual human rights protections for refugees and asylum-seekers, stopping short of mentioning those explicit words which form the fundamental issue that runs through the core reasoning for such guidance to render assistance at sea.

“There is more to do,” says Hammond.

The merchant shipping industry – which in the past 16 months participated in almost 1,000 migrant rescue operations in the Mediterranean – welcomes the decision by EU leaders to triple resources of the Triton operation. The shipping sector similarly supports the commitment of EU Member States to deploy additional operational means, including vessels and planes, to achieve this objective at relatively short notice. 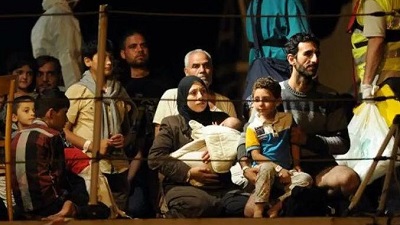 But the fact that operation Triton remains within the mandate of Frontex, the EU border agency, raises serious questions about the extent to which these efforts will fully ensure the immediate prevention of further loss of life, which should be the absolute priority.

In Brussels, Patrick Verhoeven, Secretary General of the European Community Shipowners’ Associations (ECSA) commented: “EU leaders have agreed to increase resources and assets available for search and rescue operations, within the mandate of Frontex. Laudable as these efforts are, they still fall short of the scale and mandate of last year's Italian operation Mare Nostrum, which saved hundreds of thousands of people in 2014.  What is needed immediately is a similar, EU-led, large-scale search and rescue mission, able to operate far from the EU territorial waters, which is where most of the accidents involving migrants take place.”

Commenting on the operational capabilities of Triton, Peter Hinchliffe, Secretary General of the London-based International Chamber of Shipping said: “We understand that the resources  of Triton can be deployed in international waters when called upon by national Maritime Rescue Coordination Centres, but it remains highly doubtful whether they can rapidly reach areas near the Libyan coast, where most incidents tend to occur.  It seems that merchant ships, which are not best equipped to rescue hundreds of people at a time, will continue to be called upon frequently to respond to requests for assistance. A clear mandate for humanitarian rescue operations by EU States still appears to be outstanding.”