The third and final Ollis Class Staten Island Ferry built by Eastern Shipbuilding Group for the City of New York Department of Transportation (NYCDOT) Staten Island Ferry Division has been completed. The vessel, which is part of an effort to modernize and improve the ferry service, departed ESG’s Port St. Joe Shipyard on September 1, bound for New York.

Dann Ocean Towing’s Sarah Dann is towing the ferry from Eastern’s shipyard in Port St. Joe, FL to New York City, NY. The trip will take approximately 14 days. The vessel is being delivered passenger ready with its U.S. Coast Guard Certificate of Inspection and the ABS Class Certificates. Upon arrival in New York, the ferry will be staged at Caddell Dry Dock for cleaning and another round of trials and training. It is scheduled to begin transporting passengers later this year.

“It has been an honor for our company to build the three Ollis Class Staten Island Ferries for the citizens of New York City marking a bold new chapter in the Staten Island Ferry’s 200-year-old legacy of public transportation,” said Joey D’Isernia, President of Eastern Shipbuilding Group. “These cutting-edge ferries are now the premier vessels of the world's busiest passenger-only ferry system that has reliably served the people of New York, New Jersey, and the millions of tourists New York City welcomes each year.”

ESG provided regulatory and detailed production engineering, vessel construction, and delivery of the three new Staten Island Ollis Class Ferries. The first of the vessels was delivered a year ago and commissioned in October 2021. The ferries were constructed in ESG’s Allanton yard in Florida, with the outfitting, testing, and trials performed at ESG’s newest facility in Port St. Joe, Florida.

The three Ollis Class double-ended 4,500 passenger ferries, were built from a design developed by Elliott Bay Design Group. Each ferry is 320 feet long and has a bean of 70 feet.

The new ferries are larger, reflect modern technology, and will operate more safely in extreme weather conditions than the older ferries they are replacing. They feature popular design elements of past Staten Island Ferries and new customer-service amenities such as more comfortable seating and phone-charging outlets and an oval upper-deck promenade that will for the first time serve as an outdoor “walking track” for ferry riders.

They also have the latest in marine technology for energy efficiency and environmental friendliness. There are design features on the vessels that are part of the emergency response plan with the city. According to ESG, lessons from 9/11 were built into this fleet and they can be connected to the New York fire vessels, also built by Eastern Shipbuilding Group, to support evacuations and rescue. 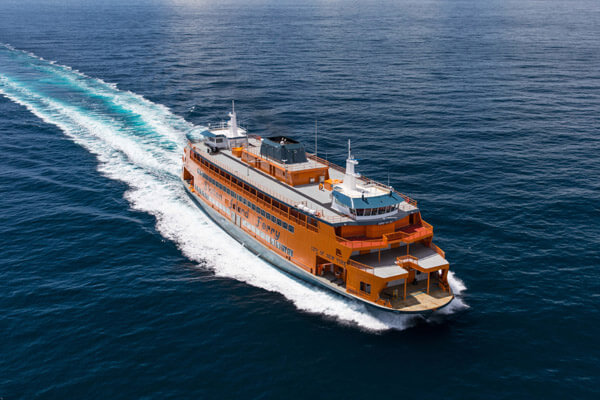 “Since entering service, the first two Ollis Class ferries built by Eastern Shipbuilding Group have operated flawlessly with zero unplanned operational downtime. This is a testament to the quality and craftsmanship built into each vessel by our employees,” said D’Isernia.

The new Staten Island Ollis Class Ferries series is named for Army Staff Sgt. Michael H. Ollis, a fallen soldier of the US Army 10th Mountain Division at Fort Drum. Ollis, a Staten Island native, was killed in Afghanistan on August 28, 2013. In addition to being the name of the class, the first hull of the series is also named in his honor. The second vessel of the class, delivered by ESG in December 2021, is named Sandy Ground in honor of America’s first African American settlements, established by freed slaves on Staten Island’s South Shore nearly two hundred years ago. 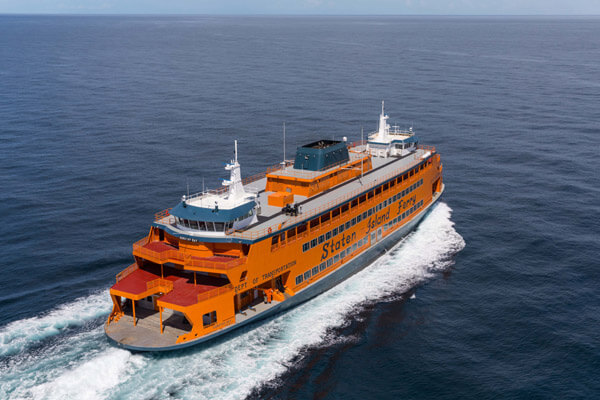