China’s Guangzhou Shipyard recently completed the delivery of the 158,000 dwt tanker Greenway to Singapore-based Eastern Pacific Shipping, marking several important milestones in the efforts to deploy next-generation greener vessels. According to the shipyard, the vessel, which is the first Suezmax built by Guangzhou, is also the world’s first Suezman LNG dual-fuel tanker.

Eastern Pacific placed the order for the vessel along with a sister ship in December 2019 as part of its continuing effort to reduce the carbon emissions of its operations. The tanker, which measures 898 feet in length, was designed by CSSC’s in-house design institute and is outfitted with the latest technologies.

Among the features being highlighted is the MAN B&W dual-fuel engine. The power plant is equipped with a high-pressure LNG system with fuel gas piping designed for pressures up to 350bar and tested up to 525bar pressure. The tanker is also fitted with a high-pressure selective catalytic reduction system. The power plant is designed to produce a service speed of 14.2 knots.

Adding Greenway to EPS’ fleet the company said will further strengthen its position at the forefront of the industry’s energy transition. With dual-fuel vessels across EPS’ three core segments of containerships, dry bulk carriers, and tankers, the company continues to use alternative marine fuels to lower its emissions today. The addition of the Suezmax also proves that having dual fuel tonnage across various vessel types and segments is achievable, viable, and sustainable. 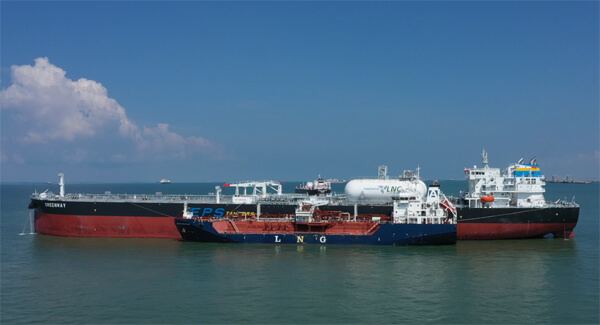 According to William Zhou, Vice President of GSI, the delivery of this vessel along with the handover in a month’s time of two methanol-fueled tankers for Proman Stena Bulk marks “a high watermark for the company in building state-of-the-art alternative-fueled ships.”

The shipyard is one of the busiest owned by CSSC. They are reporting a current orderbook for more than 70 ships valued are more than $7.5 million. The shipyard has been working to build its expertise in dual-fuel vessels, reporting that it has built or is building a total of 32 dual-fuel ships. This includes two LNG propulsion ropax vessels, two LNG propulsion Suez tankers, 14 LNG propulsion LR2 tankers, eight LNG propulsion PCTCs, and six methanol propulsion MR tankers. The yard also reports that it opened a new Marine and Technology Research Center as its team explores methanol, ammonia, bio-methane, and hydrogen as alternative future fuels.

The Greenway was delivered to EPS on June 28. She will be followed by a sister ship, Starway, scheduled for delivery in August 2022. After the delivery, the Greenway embarked on her maiden voyage to Malaysia for its first LNG bunkering. The vessel was loaded with 1,500 MT of LNG at the Port of Pengerang on July 4, 2022. India’s Reliance Industries chartered the Greenway for her maiden voyage to carry a cargo of Ultra Low Sulphur Diesel which will be loaded at their terminal in Jamnagar. The vessel will then continue to trade in the spot market.