Engines Retrofitted for Methanol are Installed on Antwerp Tug

Work is proceeding on a unique project to retrofit one of the tugs at the Port of Antwerp to become the first methanol-powered tugboat as the port continues to participate in projects to enhance sustainability. Antwerp is moving toward launching “Methatug” along with “Hydrotug 1” to demonstrate future alternative green fuel operations.

Methatug is part of a broad industry collation project supported by the European Union Horizon 2020 research and innovation program, which is providing more than €75 billion to a broad range of research. The Fastwater project, which was one of the ones selected for Horizon 2020, focuses on developing methanol for the shipping industry.

Among the first projects was the development of a conversion kit to retrofit high-speed and medium-speed diesel engines for the use of methanol. Linked to that project was a second project that calls for the conversion of a tug at the Port of Antwerp to operate dual fuel but primarily on methanol. The project also includes crew training and developing the supply chain for the tug.

The Port of Antwerp-Bruges reports that the first of the engines was recently returned to the tug. The second engine from the tug has also completed its retrofit and was due to be installed last week. 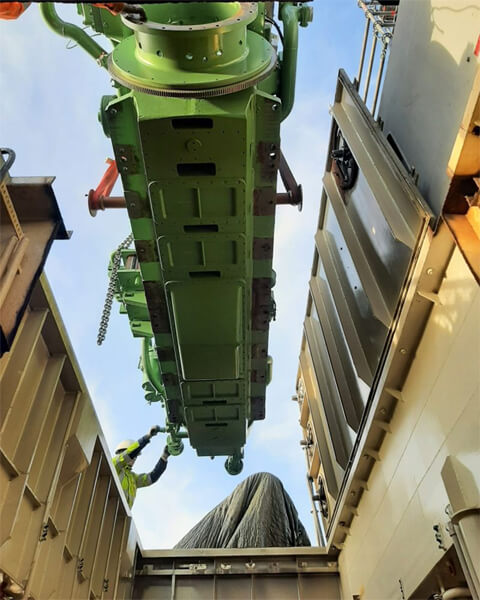 “Methatug has its engines back! After Anglo Belgian Corporation turned them into dual-fuel engines, the first one was installed,” the port wrote in a social media posting. “This will allow our tugboat to run largely on methanol, when it’s finished, reducing its CO2 emissions significantly. It is yet another important step towards greening our fleet.”

Other partners involved in the project include Belgian engineering company Multi, which carried out the feasibility study for the project, Swedish shipbuilder Scandinaos, which designed the vessel’s modifications, and the German company Heinzmann which adapted the injectors.

No timeline was announced for when the tug would return to service. Other elements of the Fastwater project include a pilot boat, a coast guard vessel, and a river cruise ship, all being converted to operate on methanol. The project is also seeking to develop next generation engines that fully exploit methanol’s beneficial properties as an engine fuel, for increased efficiency and even lower emissions.

The Port of Antwerp-Bruges says the projects illustrate its ambition to become a multi-fuel port by 2025.