The economic impact of the coronavirus is taking a strong toll on the shipbuilding industry according to a new analysis from BIMCO. While the orderbook is at its lowest point in 17 years, BIMCO however reports that even with increasing demolitions fleet volumes are continuing to rise based on deliveries of existing orders.

“Contracting activity has been quick to feel the effects of the pandemic with owners and investors showing little appetite for new ships,” says Peter Sand, BIMCO’s Chief Shipping Analyst.

Looking at the orderbook for commercial shipping consisting of container ships, dry bulk, and tankers, BIMCO reports in total orders have declined by 50 percent. Hardest hit has been the dry bulk sector followed by container ships. Tanker orders have not fallen as dramatically largely because they had already been at lower levels over the past two decades.

In the first seven months of 2020, orders for dry bulk vessels were down by 65 percent versus the prior year. At just over 63 million DWT, the dry bulk order book is at its lowest level in sixteen years according to BIMCO. Further, with the decline in trade volumes and an expected long road to recovery, they do not expect the orderbook will rebound quickly.

The overall tanker sector is showing the smallest declines due in large part to the fact that orders for new tankers were already at lower levels. BIMCO reports that orders for crude oil tankers were down just over four percent in total DWT while product tanker orders fell 12 percent from year-ago levels. In fact, BIMCO reports that product tankers were the only segment to have reported an increase so far in 2020, up nearly three percent in the first seven months of the year. Orders for crude oil tankers however are down more than 40 percent so far in 2020. 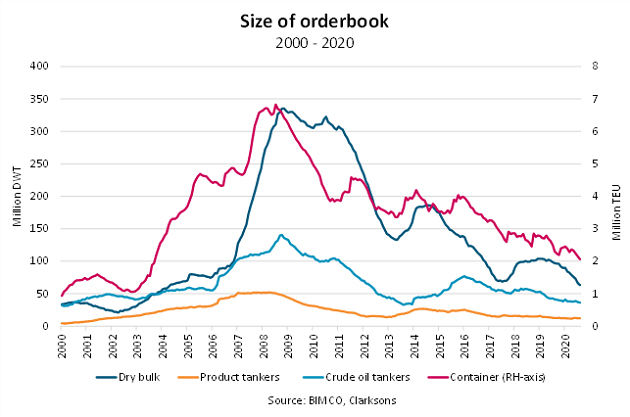 Efforts by shipowners and operators to manage their fleets and lower costs are also reflected in a strong recent increase in demolition activity. Demolitions measured in DWT were up 50 percent in July versus the year-earlier and 400 percent versus April 2020 when many yards were idled by the pandemic.

“The sharp uptick in demolitions following the reopening of yards is entirely expected due to the demand shock from the Covid-19 crisis and expectations of a long road to recovery ahead of us. This is reflected in both the higher demolition numbers, with owners pushed to act on older and substandard ships that they had kept sailing until now, as well as the drop in contracting as the outlook for the next few years has become much gloomier than it was at the start of the year,” says Peter Sand.

As deliveries continue to outpace the demolition activity, BIMCO reports that in the near term fleet volumes have continued to rise. With trade volumes expected to decline significantly this year and not recovering possibly until 2022, BIMCO however predicts that balance in the shipping markets may be hard to achieve.