Global offshore oil production (including lease condensate and hydrocarbon gas liquids) from deepwater projects reached 9.3 million barrels per day (b/d) in 2015. Deepwater production, or production in water of depths greater than 125 meters, has increased 25 percent from nearly seven million b/d a decade ago.

Shallow water has been relatively less expensive and less technically challenging for operators to explore and drill, but changing economics and the exhaustion of some shallow offshore resources has helped to push producers to deepwater or, in some areas, ultra-deepwater (at depths of 1,500 meters or more) resources.

The share of offshore production from shallow water in 2015 was 64 percent, the lowest on record.

Advancements in drilling technology, dynamic positioning equipment and floating production and drilling units have made prospects viable that were previously unreachable. Although technological advancements have made new areas accessible, deepwater projects require more investment and time compared to shallow waters or onshore developments. As a result, most nations with offshore assets operate only in shallow water. 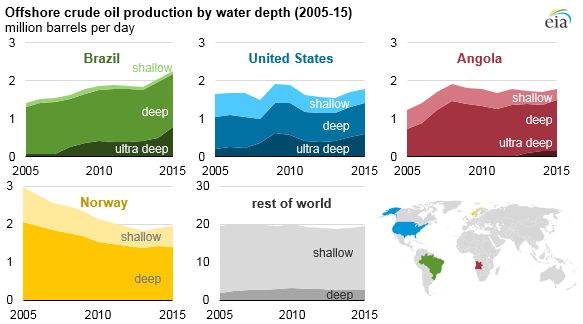 The coast of Angola shares similar geologic features with the coast of Brazil because of the separation of the African and South American tectonic plates during the Early Cretaceous period, around 150 million years ago. These geological similarities have led producers in Angola to target several major basins for presalt exploration.