The Norwegian maritime industry is continuing its effort to move forward with an innovative generation of fully electric autonomous vessels that will contribute to reducing emissions and improving logistic operations. In the latest development, a leading Norwegian furniture manufacturer is involved in a new preliminary study to develop a unique coastal vessel to move containers between its factory and the shipping port replacing traditional truck transportation.

Furniture manufacturer Ekornes is partnering with German logistic company DB Schenker along with design firm Naval Dynamics for the study of the new autonomous vessel. They will be partnering with Kongsberg and Massterly, a joint venture between Kongsberg and Wilhelmsen, for the development of the autonomous technology and to oversee the operation of the new feeder vessel.

“With an autonomous, all-electric container feeder that picks up our products directly from our quay at Ikornnes, we can significantly reduce our overall carbon footprint,” said Roger Lunde, CEO of Ekornes. “We will also have better control and greater flexibility in our logistics.” 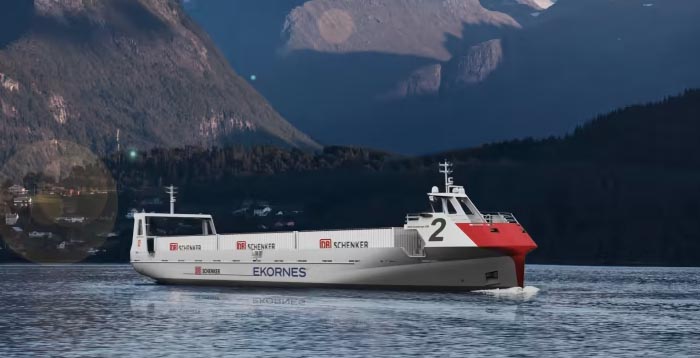 The new autonomous, electric, container ship is intended for shorter distances and is being developed using Naval Dynamics' NDS AutoBarge 250 concept, which was created in collaboration with Kongsberg and Massterly. The vessel will run between Ekornes' port at Ikornnes in Sykkylven, to the port of Ålesund, which is the shipping center. The freight route is 23 nautical miles.

The design concept calls for a 164-foot-long feeder barge that will have a capacity of up to 300 tons of cargo. It would operate at a speed of 7.7 knots completing the trip in approximately three hours. The goal is for the vessel to sail without a crew while being monitored by Massterly’s Remote Operation Center. The center is supporting other projects including Yara Birkeland. Currently, the vessels are required to operate with a crew but the companies are working to prove the technology and support changes in the regulations to permit fully autonomous operations.

“We are beginning to see a general shift away from freight transport by road, which has a significant carbon footprint, to clean, energy-efficient freight transport by sea over short distances,” noted Geir Håøy, CEO of Kongsberg. His company is currently involved in several all-electric and autonomous projects, including Yara Birkeland and ASKO and they point to this class as playing an important role in the advancement of autonomous operations.

Yara christened its new vessel last week marking its entry into service and the next phase of testing as they also aim to move to fully autonomous operations. Yara Birkeland, which measures 262 feet in length and is 3,200 dwt, is powered by 20 batteries with a capacity of 6.8 MWh. The vessel is designed to operate on a seven-mile route transporting fertilizer from the factory for shipment and when it is fully operational the plan calls for both autonomous navigation as well as autonomous loading and unloading.

Norwegian grocery distributor ASKO also ordered two autonomous cargo barges. The vessels are being built in India and will operate on a crossing of the Oslofjord, each carrying 16 truck trailers at a time. The AutoBarge, like Yara Birkeland, is targeting fully autonomous operations starting in 2024.